News and Intrusion: Drawing the Line in Tabloid Britain 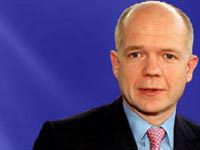 The British Foreign Secretary, William Hague, has been forced to reveal details about his intimate and private life with his wife, to make the deepest personal statement about his sexuality and his personal advisor, Christopher Myers, has been forced to resign from his job. Why? Because some Internet blogger insinuated something. It's Big Brother, Cor Blimey! Tabloid Britain!

There are still areas of the planet in which it is possible for a person to be lynched and hacked to death if a group of passers-by yellS "He's a witch!" Fortunately, they are restricted to isolated villages in areas where education and literacy have yet to reach. There are also areas of our planet in which a person can be judged for his or her sexuality. Fortunately, once again, more and more, civilized and educated people defend that what a consenting adult decides to do behind closed doors is of no concern to anyone else, given that nobody's freedom is impinged upon or that no law is broken in the process.

Therefore it comes as even more shocking when yet again the central story in the British media is an allegation rippling through the Blogosphere about a public figure having shared a hotel bedroom when on a campaign tour; namely William Hague, the ex-leader of the Conservative Party and now British Foreign Secretary, with his personal aide.

And why? Because apparently while travelling up and down the country on the recent election campaign, he booked into hotels sleeping in a twin bedroom with Christopher Myers.

First and foremost, so what?

Secondly, how is it possible that in this day and age that adult people in the UK can insinuate, and in public, that just because two men go to rest in the same hotel room, they must therefore be engaging in torrid impassioned moments of steamy hot sex?

For those who know what a political campaign trail is, the most likely reason for any eventual room-sharing was the desire to save money, the desire to work together and as for anything else, after a day making speeches and shaking hands, the most probable likelihood was that neither man had the energy to pull his shoes off before crashing out flat on his back.

Is Britain turning into a tabloid society?

There has always been a nudge-nudge, wink-wink element in British society willing to descend to the most sordid depths of depravity at the drop of a hat, or pair of pants, behind people's backs of course, which makes it all the more disgusting. It's the tabloid "Cor Blimey!" society hooked on "wow!" stories in an ever-more intrusive media which has forgotten where to draw the line, which has forgotten the notion of common decency and respect for other human beings and which has become an attention whore, apparently run by unscrupulous scumbags and controlled by a bunch of wide boys, spivs and hustlers.

The sickening members of this racist, sexist "Cor Blimey!" tabloid society see two men walk into a hotel room...(nudge nudge, wink wink, "Eh? I wonder what they are going to do? Oi!!") or sees the new secretary is unmarried (must be a lesbian), commenting on old Miss Black never having had a family ("Must be frigid") or the Negro who has worked hard and got himself a decent job climbing out of a nice car ("Must be a drugs trafficker").

Welcome to Big Brother, Cor Blimey! Britain, home of the Spanking Sarah stories (the prostitute who used to tan Members of Parliaments' hides in a flat rented from a Government Minister), the country where a microphone was allegedly inserted into Prince Charles' toilet bowl, the country where someone's sexuality is an issue.

And now we are speaking about sexuality, let us address the issue. So what? William Hague has been categorical that he has never been involved in sexual acts with men, and was forced to reveal detailed personal and private information about his relationship with his wife to defend himself against the mob.

And his aide lost a very good position and a well-paid job... his livelihood.

But what if they had been homosexual lovers? What if they had rented a hotel room and fallen into each others' arms? Would anyone ask if they were happy? Would it have anything to do with anybody apart from the two men involved and their families? And how "normal" are "normal" members of society when they get home and close the door?

Especially those who cast stones.

Finally, since when is the Blogosphere newsworthy? It's chatter. Gossip. And we have to differentiate between what is news and what has not yet become news, and should never become so. In my 35-year career as a journalist I have been fed snippets about the private lives of countless public figures which probably could have made me a rich man if I had descended to the depths of those whom I am writing about, the type for whom the behaviour of politician's kids and families, or sexuality, are fair game.

I did not. And I can look myself in the mirror every day and feel great.