The Archbishop and Lawrence of Arabia

The British network Sky News reported on the courageous statements by the Archbishop of Canterbury stating that "the invasion of Iraq has caused tremendous damage to the region." 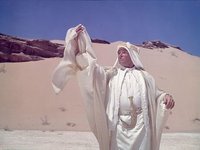 The Archbishop and Lawrence of Arabia

Criticizing the actions of Britain and the United States, which he branded as "imperialist," the archbishop went on to say that in Iraq, "the Western definition of humanity is not being observed."

Colonel T. E. Lawrence of the British Army, horrified by the barbarity imposed on the Iraqi people, also attended the press to give his testimony and protest many years ago. Here are his statements, published by the newspaper "Sunday Times":

"The British people fell into a trap in Mesopotamia. We can hardly get out of there with dignity and honor. It is being constantly deceived by the concealment of the truth. The Baghdad communiqués are outdated in relation to events, they lack sincerity and are incomplete. The reality is worse than what we have been told. Our government is more inefficient and more bloody than that which we describe. It is unworthy of our imperial history and will prove very briefly abject to ordinary treatment. We are on the verge of a disaster."
In the same interview, the Colonel reported extremely serious facts:
"Whole cities were razed by British aviation. In four months, 10,000 people died. The tanks, by land, forcing people into a panic towards the open where they could exterminate them better."

Courageous people, the Archbishop of Canterbury and Colonel T. E. Lawrence. They deserve recognition for being good men.

But more important than these two interviews are the dates on which they were given. The dates of the newspapers should be cause for reflection for us all, as we show below.

In fact, this "Colonel T. E. Lawrence" becomes the famous "Lawrence of Arabia", featured in many films, and walked around the area of "1001 nights" at the beginning of last century.

The greater the outrage when we realize that all these raids were made on behalf of the good, and people who call themselves well-meaning. To them, the words of Victor Hugo: "No one is bad, and how much evil was done."

All these raids were made by people who call themselves religious. To them, the words of Voltaire: "The great war is that each general has to bless their flags and solemnly invoke his God before he exterminates his neighbour."

All these raids were made by people who call themselves civilized. To them, the words of Auguste Rodin: "Civilization is, in short, only one layer of paint that is washed away by any drizzle”.

All these raids were made on behalf of Justice and by people who claim to be fair. To them, the words of Thomas Jefferson: "I fear for my species when I think God is just."

All these invasions, finally, were made in God's name. Those which determine, devote the words of Blaise Pascal: "Never a human being does evil so completely and with as much pleasure as when you do so in religious conviction."