The New Pirates: Reflections on the Unjustifiable Attack on the "Freedom Flotilla" 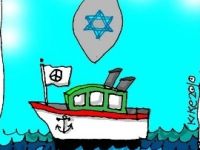 The New Pirates: Reflections on the Unjustifiable Attack on the "Freedom Flotilla"

St. Augustine tells the story of a pirate captured by Alexander the Great, who asked, "How dare you molest the sea?" "And how dare you defy the whole world?," replied the pirate. "For to do so with only one small ship, I am called a thief, but you, that makes a huge sea, is called the emperor." - Chomsky, 2006

From a thief to a nobleman: This is our difference, O best of princes: I conquer some coins, you steal the provinces - Victor Hugo, French writer.

How is it possible to understand the Israeli policies of ethnic-religious segregation without alluding to the hideous system of apartheid in South Africa? How to characterize the systematic discrimination against the minority Palestinians in the Arab-Israeli conflict, but as segregationism?

How not to draw a parallel between the process of territorial expropriation of the colonial era, which occurred in Latin America and Africa, and the expulsion of the Palestinian people? How to define the long and brutal Israeli siege on Gaza - preventing the entry of food, medicines and materials for reconstruction - but to transform the region into a ghetto?

And what was the attack on the ghetto of Gaza (December 2008/January 2009) except a pogrom? How do they justify indiscriminate attacks on the Palestinian civilian population, but imbuing themselves with a pretense of a civilisatrice mission that, simultaneously, is supported by the war crime of the Israeli F-16 fighters hunting in totalizing form, to cause civilian death?

How are six decades of military occupation and colonialism acceptable? How to ignore the interaction of these over-rated chapters of the Palestinian drama and not realize a pattern of repeated crimes against humanity?

The siege of Gaza, imposed since 2007, is criminal. Israel has been blocking the entry of food, medicines and commodities, fuel and electricity for three years which clearly violates the principle of distinction between civilians and combatants. The measure results in a grotesque spectacle: the entire population is forced to watch the hunger, poverty and death of their loved ones.

It is registered that the people of Gaza are imprisoned and cannot leave the place. They have been left trapped in a total war zone, forced to accept collective suffering and restraint applied by the occupying power.

Preventing the delivery of humanitarian aid is not an exercise of Israeli sovereignty - is a show of aggression without ethical boundaries. It shows that Israel has chosen the option of confrontation and violence, even against civilians and international observers.

Attacking ships - whether they are carrying humanitarian aid or not - is piracy. Killing people is murder. Doing it in an attempt to discourage international support for the Palestinian cause is nothing short of state terrorism.