The Dangerous US Movie Industry

The US movie industry is dangerous. It creates xenophobic national or cultural stereotypes creating images of an external threat, the “them” which justifies the “us”, in this case the U.S. The latest outrage against Russia is MGM’s remake of Red Dawn. 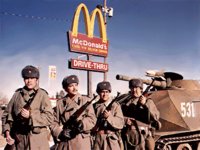 The Dangerous US Movie Industry

Red Dawn was an infantile, jingoistic, gung-ho flick catering to provide an adrenalin rush for culturally challenged simpletons, made in 1984 (predictably), portraying the USSR and Cuba as the villain and the United States of America as the hero. This time around, the villains are the People’s Republic of China, and of course the eternal threat, Russia.

In the remake, which comes out in November, the US pulls out of Iraq, and concentrates in the island of their dear ally, Taiwan, facing a threat from mainland China while welcoming Georgia into NATO.

What the movie does, within the space of a couple of hours, is inject deep into the psyche of the movie-goers an updated Cold War scenario, through the recreation of foes that never existed, providing the justification of control mechanisms through the manipulation of fear. It is the incarnation of a powerful “them” which justifies the “us”, or the actions of the U.S.

While it would not be beyond the realms of fantasy to envisage a Washington engaged against two such monumental military colossuses, while the acceptance of Georgia into NATO would indeed be a decision made by Washington and not the NATO membership and while such a move would surprise nobody after NATO lied it would not spread eastwards, then promptly did, Washington knows very well that it is only ever partially successful in campaigns against scantily-armed lesser fry, beaten into submission through massive aerial bombardment. Russia and China have the muscle and the might to fight back. Mightily.

While a military confrontation with Russia would result in the total liquidation of any concentration of NATO troops anywhere near Russia’s frontiers in a salvo of missiles so dense that it would blot out the Sun, a simultaneous campaign against Russia and China would defy logic.

Yet it does not matter whether the film is plausible. The demonization of Russia and, now, China, is a mainstay of American political and cultural output, just as the denigration of the Iraqi Government under Saddam Hussein, upon accusations just as idiotic and flimsy, was a justification for a military campaign.

Figures. The question is posed, why?