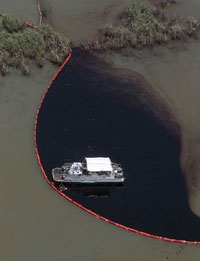 The blowout of the BP oil rig in the Gulf of Mexico is full of symbolism. With the slow spread of the resulting oil slick, more and more bitterly ironic aspects of the disaster are becoming apparent. Oil, sometimes referred to as “black gold,” millions of gallons of it, are streaming from an open well at the ocean floor, destroying precious marine life wherever it goes. The damage done to Louisiana's delicate marshlands already seems fatal. The entire local fishing industry is in the process of being wiped out. Before long, local currents will bring the oil into the Caribbean Sea to Cuba, then to the Bahamas. From there, the mighty Gulf Stream will be carrying the oil along the US and Canadian Coast through the North Atlantic all the way to Europe. Few would venture to predict the full extent of the resulting environmental damage. (Incidentally, where are the climate warmists now that we really need them?) It does not take a lot of imagination to predict that already vulnerable fishing grounds off Newfoundland, Iceland and the North Sea will soon be in serious jeopardy.

What we are witnessing is the outcome of criminal negligence on the part of BP, the oil industry in general and certainly the US government, which is ultimately responsible. In a demonstration of ineptitude and inaction bordering on the criminal, the Obama administration is doing nothing to stop the oil from flowing into the ocean. Like the oil slick, the Obama administration is a black disaster in all the senses the term implies. Like the oil slick which, incidentally, has the color of excrement, the Obama administration is spreading excrement. As a matter of fact, it is smearing the entire globe with it. Shooting up poor villages in Pakistan, Afghanistan, Iraq, and threatening to so wherever else people do not welcome the kind of mafia business the US likes to call capitalism, or freedom, or democracy or whatever.

Obama himself seems to believe he is actually on the right course. Perhaps he misundersood the Nobel Peace Price he was awarded, to mean the Nobel PEAS price. (Obama seems to have been a very, very average student, benefiting from affirmative action). Perhaps he cannot tell the difference between peas (or peasoup) and excrement. His olfactory sense blacked out by the sweet smell of success. Perhaps Obama believes he is actually handing out peasoup and doing good. It is impossible to tell, since Obama does not allow journalists to ask him questions. Thus Obama still is a dark secret to all of us. I suspect he is even a dark secret to himself.

The US-made oil slick making its way across the seven seas is just the latest episode of a tragedy the world has had to suffer ever since the US began destroying the world in 1898. Since then, joining the sorry fate of North American Indians, millions have been killed in the Philippines, Nicaragua, Haiti, Japan, Korea, Vietnam, Cambodia, Iraq, Colombia, Afghanistan and dozens of other places. All in the name of freedom and democracy, dressed in red, white and blue.

The oil slick is a welcome reminder that the true colors of freedom and democracy, US-style, aren't bright. Not red, white and blue, but dark: black and brown. These are the true colors. The color also of Coca Cola, McDonald hamburgers, oil, and the grime on the faces of US-soldiers on killing sprees across the globe. The color of the metal their guns are made of. The color of the tenement dwellings housing their families in decaying cities across the US. The color of SWAT uniforms worn by policemen kicking in the front doors of houses for no reason at all. The color of night, the perceived color of US concentration camps at Guantanamo Bay, Bagram in Afghanistan and Abu Graib in Iraq. The color of Darth Vader. The true color of the current resident of the White House.

Black and brown were also the colors in which Hitler and his National Socialist followers wrapped themselves. The SA's brown batallions, the black SS uniforms. It is quite fitting the BP oil rig blew out on April 20. Hitler's birthday.