The United States of America has done little or nothing to curb drug trafficking in Afghanistan, where opium production has risen by 40 times, overseen by NATO. In Iraq, the US-run prisons have turned into schools for terrorists and the US Armed Forces are violating their agreements with the Iraqi Government. This is hardly the outcome desired from campaigns launched in 2001 and 2003. 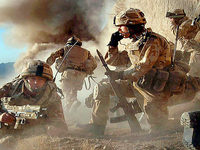 As for Iraq, the campaign has been a disaster from beginning to end. Based upon lies and trumped-up allegations about weapons that did not exist, the US armed forces showed a callous disregard for human rights as they doled out reconstruction contracts to White House cronies, without tender, as war crimes were committed in prisons and in civilian areas.

As regards the prisons, Iraqi General Ahmed Obeidi al-Saedi has been quoted by The Guardian stating that around 80 per cent of detainees in US-run prisons in Iraq have either aligned with or rejoined terror networks (such as Al-Qaeda). He told the British newspaper that detainees say the prisons “are the perfect environment to reorganize Al-Qaeda”.

As the US prepares to hand over administration of the prisons to the Iraqi authorities next month, it claims that only 4 per cent of the 88,000 detainees held in Iraqi prisons since 2003 have re-offended. Another lie.

The US policy of paying off Sunni groups not to attack, mirroring the policy in Afghanistan to use tax-payers’ dollars to pay off the Taliban not to attack (if you can’t beat them, join them) seems also to have failed, to the extent where the US Armed Forces have had to break their agreement with the Iraqi authorities and carry out operations beyond their sphere of operations.

In 2008, Washington and Baghdad signed an agreement limiting the activities of US troops to their bases, while in 2009 all autonomous actions by US forces in Iraq should have terminated. After all, Washington said the war was won. According to the War and Peace Foundation, covert special forces operations are suffering alarming casualties, in areas of Iraq outside the bases.

For the Foundation’s director, in declarations to Press TV, the growing list of casualties is proof of US violations of their agreement. Certainly, growing areas of Iraq are already spinning out of control, even the capital city Baghdad, where vast regions are no-go areas for NATO units, and now Anbar and Diyala.

How, then, can the USA declare withdrawal dates for its troops from Iraq by September 2010 and Afghanistan by July 2011? Once again, the policy has not been thought through. Washington stirred up a nest of hornets in both theatres and the only plausible long-term strategy now, in military terms, is long-term engagement over say, two decades, which is politically inexpedient. Therefore, the option is to pull out, save face politically and lose militarily.

Next time around, and hopefully there will not be one, maybe Washington can realise that the days of globe-trotting setting up bases, instigating unrest, committing war crimes and siphoning off resources creates more enemies than friends. It should be up to the State Department, and not the Department of Defence, to make policy along with the White House.

And once and for all, the bottom line is development, not deployment.

While the current Administration had a huge tab to pick up from the disastrous foreign policy of the Bush regime and while it is true that President Obama and Secretary of State Hillary Clinton, more than Vice President Joseph Biden, have done a lot towards building bridges, it remains to be seen quite how much change President Obama has delivered.

Next chapter: The Islamic Republic of Iran. Here, we shall see.