The United States of America certainly does not deserve to be known as the United States of Torture. Or does it? The most shocking and horrific acts of human cruelty and barbarity were committed by personnel representing the State, they had a certain degree of hierarchical backing within this State and the courts only sprang into action when the whistle was blown by human rights groups. 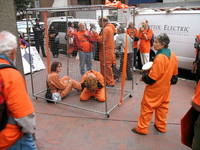 True, there have been numerous prosecutions and punishments, some of which were extremely light in the circumstances. Under international law, the inviolability of the human person and the equal status of the human condition are universal rights which are accepted by each and every signatory State of the UN Charter and the Geneva Conventions. Among these is the United States of America.

However, the widespread frequency of such cases of physical and psychological abuse by trained personnel working for the US State, as well as the contracted parties, would point towards a culpability and accountability of the State, due to the fact that ultimately, in the case of the sub-contracted parties, the State had an obligation to oversee modus operandi and to establish a system of checks and balances; in the case of employees of the State, i.e. military personnel and CIA psychologists and operatives being involved in registered cases of torture of illegally detained persons, the State is involved directly.

Furthermore, in the case of the Pentagon giving the nod to the practice of water-boarding, a medieval torture-chamber-type simulated drowning, then perhaps Donald Rumsfeld should be hauled up before the nearest court and tried on human rights violations. Unless, of course, the United States of America does not wish him to be tried.

And here is the crux of the matter. Why did the USA illegally kidnap Slobodan Milosevic, against the Constitution of Serbia and the FR Yugoslavia at the time, and bring him before a kangaroo court, the International Court of Justice at The Hague, Netherlands, when the USA itself is not a signatory nation?

Because the USA wishes to exonerate its own citizens from being placed before the court and being tried for war crimes and crimes against humanity. Why did the USA commit acts of torture on vessels in international waters and aircraft in international airspace or in certain nations where there exist legal loopholes? To escape from accountability.

Yet under international law, accountability is not something you can escape from by not signing one statute or avoiding to sign a protocol. There are international norms on common human decency which have been woven into the legal framework covered by the UN Charter, International Human Rights Treaties and Customary International Law, among these the Geneva Conventions.

If Washington is serious about its intention to come back into the fold of the international community, to enter the hearts and minds of the rest of humanity as an equal and respected member of the community of nations, then it has to behave like one. This does not mean a few token sentences for the intellectually challenged “persons” (?) who perpetrated these acts of evil. It goes far beyond that.

It means that the United States of America has the moral duty and legal obligation to go after each and every one of those involved in the illegal acts of butchery in Afghanistan and Iraq, following up and holding them responsible for the consequences of these acts and holding accountable each and every person involved in the decision-making process, however high their position in the pyramid may have been.

Then, yes, we can say that the United States of America represents freedom, justice and democracy…Not until.