We Don’t Need Your European Union!

The population of the European Union is a hostage of the undemocratic supra-national pseudo-federal all-engulfing non-elected umbrella State which has been imposed on them from above in a top-down holier-than-thou attitude, riding roughshod over the needs and aspirations of the citizens of the member states. 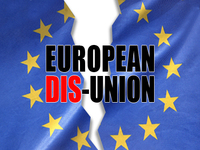 We Don’t Need Your European Union!

The gray Eurocrats, vying and jostling for positions after (in many cases) they were thrown out of their national Governments by the D-word: Democratic elections – found themselves with sighs of relief in lucrative and largely unaccountable positions in the EU’s myriad of institutions. Doing what? Quite.

And let us be honest. Most of them are there because they are failed politicians who did not manage to make the mark in their national political hierarchy. Therefore it is not surprising when they cobble together something as absurdly ridiculous as the current European Union.

Among the many wonderful and glorious things this self-righteous old boys’ club for failed politicians has done is to stitch together a Union of nations by hook or by crook. They used token referendums in certain States, not daring to hold them in others where they knew the answer would be against the Plan. If the Referendum did not produce the required result, they then refused to listen to the will of the people and repeated the process ad nauseam, changing wording until a tired and tiny percentage of the population gave up and said “Yes, I guess”.

Other measures which had a direct result on national sovereignty, such as the Treaty of Lisbon, were simply imposed as European agenda (ratified by national Parliaments) have had their contents kept to the bottom line and small print of political manifestoes in legislative election processes. Who knows, for example, in the UK elections, what the European policies of their parties will be over the next five years?

The result is the weird and wonderful creature we have before us today. It is one in which the illustrious Eurocrats, in their utter wisdom, have managed to create a system whereby speculative raids on markets have direct results on the livelihoods of the hard-working citizens, based on the opinions of some rating agency which appears to have greater powers than any elected institution.

Now, what in the name of God is this? Maybe the Eurocrats accept it with a shrug (after all, they have already feathered their nests) but why should the people of Europe, the ones who work hard to pay their salaries?

Why should a citizen of Europe accept a reduction in his wage just because his national government and the Eurocrats in Brussels and Strasburg have implemented a stupid and dysfunctional system which (s)he never voted for? Why doesn’t Standard and Poor’s pay? They created the problem. And what sort of an idiotic system allows Standard and Poor’s rating agency to bear a direct influence on the daily lives of (Greek) citizens, with the spectre of this tsunami of social and economic collapse looming on the horizon elsewhere?

Who asked the people of Europe if they wanted such a system imposed upon them? Who told the citizens of the Eurozone that prices would triple while salaries remained virtually the same? Nobody, because if they had told the people, the people would have said no, just like the message would have been a resounding NO! for every other EU institution they so unilaterally and undemocratically saddled us with.

If the policies of the European Union are these, leading to social rupture, social exclusion and social and economic catastrophe for a substantial part of its citizens, then let us all chant together, to the sound of Pink Floyd’s The Wall:

“We don’t need no Euro Union,

Hey! Brussels! Leave us all alone!”