The Book of Revelation, 8: 11 speaks of the killing large swathes of humanity. Given the incapacity of the authorities to protect people from Influenza A H1N1, as they stood back and let it spread, what would happen if Katla spewed Suplhur DiOxide into the atmosphere? After all, So2 plus H2O = H2SO4. H2SO4 is sulphuric acid. 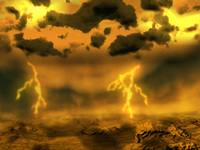 This article is not a scientific study. It is an opinion piece and it is placed in this section on purpose, so as not to be alarmist. However, those of us who have access to media outlets which reach millions also have a collective responsibility and in the case of the journalist it is to inform.

We saw what happened in the case of Influenza A H1N1. The World Health authorities stood back and watched passively, limiting themselves to commenting on what was happening before finally admitting that it had become a pandemic. There was not a single attempt at quarantine; some said aircraft could not be grounded. (Why not? They were over northern Europe last week). Others asked where the money would come from (well easy. Just pretend it’s a bank and suddenly trillions of dollars appear).

And who can guarantee that the authorities would do anything next time? For instance, who has warned us about what happens if Katla’s Sulphur DiOxide (SO2), when released into the atmosphere, and mixed with the water (H2O) in the clouds? Because SO2 and H2O = H2SO4, sulphuric acid. And what kind of ecological catastrophe could be unleashed by acid storms?

Such an extreme event would not only destroy the forests, but also the fields, contaminate the rivers, the seas and poison the water supply for the foreseeable future.

Is this pure conjecture and empty waffling to get the piece read? No, it is not. It is not, because Eyjafjallajökull (ei-zha-fiAla-jo-kUtl), Island-Mountains Glacier, has done it before, more specifically in 920, 1612, 1821-1823 and each time it set off the far larger and far more powerful giant, Katla. So the probability is not remote, it is, according to data available so far, one hundred percent certain.

And let us not forget another lesson, that of Laki, another Icelandic volcano, which blew up in 1783-1784, when 120 million tonnes of sulphur dioxide was released (three times the European industrial output in 2006), resulting in thousands of deaths across the Old Continent.

It would be well for the people to take stock of what might happen and to prepare themselves for best-and worst-case scenarios. With A H1N1, there was a lot more the authorities could have done. With a volcanic ash cloud turning into a sulphuric acid storm, one can only turn to God.