George W. Bush was elected President of the United States of America twice, once through the manipulation of the voting system (countless numbers of voters were blocked from voting in the key State of Florida) and once through the manipulation of fear, (Osama bin Laden turning up on cue weeks before the election). An analysis of the eight years of the Bush regime will determine whether this pariah of the international community was a patriot or a traitor. 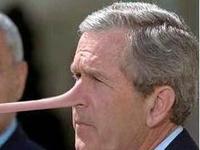 The United States of America needed a friend at the turn of the new millennium after the Clinton years had started to divorce Washington from the hearts and minds of the international community, turning against Serbia, which had been fighting bin Laden and the Albanian terrorists in Bosnia and in Kosovo. Bin Laden, it now transpired, even had a Bosnian passport and the KLA has been proven to have been a terrorist organization attacking civilian targets, despite being wined and dined on Capital Hill.

However, the Bush regime turned out to be worse still. Washington found out for itself what international terrorism meant soon after Bush and his National Security Adviser, Condoleeza Rice, failed to provide national security, preferring instead to pick up the debris from 9/11 and turn it to their own advantage, using the misfortune of 3,000 people to foster their own energy agenda in Iraq.

In the process, it has been calculated by the Center for Public Integrity and the Fund for Independence in Journalism, two non-profit making journalistic watchdog Organizations, that Bush and the members of his regime lied no more than 532 times, “in an orchestrated campaign to effectively galvanise public opinion, and in so doing, take the nation to war based upon false pretexts”.

These blatant lies claimed that His Excellency Saddam Hussein of Iraq had weapons of mass destruction and that his government had ties to Al-Qaeda. Charles Lewis and Mark Reading-Smith write in their summary of the study produced by these watchdogs that “The truth is that the Bush administration took a country to war based on wrong information which it propagated methodically and which culminated in military action against Iraq on March 19, 2003”.

The members of the regime mentioned in the report were ex-President George W. Bush, Vice President Richard Cheney (also known as Dick), the country’s worst ever National Security Advisor (she failed to protect her country) and then even worse Secretary of State Condoleeza Rice (she drove a stake into the hearts and minds of the international community, divorcing her country from the community of nations as she perversely made a public and global stage for a purging of her hatred of herself), Defense Secretary Donald “Waterboarding” Rumsfeld, the first Secretary of State Colin “Magnificent Intelligence” Powell (who lied through his teeth at the UNO), Under-Secretary of Defence Paul Wolfowitz, and White House Press Advisors AriFleischer and Scott McClellan.

Bush himself lied no less that 259 times, according to the report while Powell came a close second (224).

The concrete effect of these lies and their propagation by an international media which seemed to follow the axiom “If you are not with us, you are against us”, was the total destruction of the State of Iraq, which led directly to the deaths of hundreds of thousands of people, policies of torture being instituted and even institutionalised by Washington, and all of it outside international law.

George W. Bush is synonymous with torture, with military failure (the Taleban is claiming victory in growing parts of Afghanistan and Iraq is in a state of limbo only because Washington buys off parts of the population, as Saddam Hussein did, the difference being that Washington has more ties to Al Qaeda that the ex-President of Iraq).

On the economic and financial front, the Bush regime is synonymous with the collapse of the economic and banking system, overseeing once and for all the defeat of the Liberal monetarist capitalist market-economy approach to management of public and private sector finances, underlying the fundamental need for interventionism, which is what his ideological opponents have been saying for the greater part of a century.

The fact that on his farewell speech he could claim that he can look in the mirror and feel great about himself is a telling and revealing statement that here is one callous, arrogant and self-opinionated bigot who served only as the most classic example to highlight all the evils which his enemies had levelled at the United States of America.

Therefore George W. Bush, and his odious regime, in insulting the fundamental precepts underpinning the principles of the Founding Fathers, in undermining the basic pillars of freedom and democracy, deriding the practice of debate, discussion and dialogue which they represent, stands out as the worst traitor the United States of America has ever known, having done more damage to its good standing and reputation than anyone else in the history of this great nation.