If the new nuclear disarmament treaty between the U.S. and Russia, the successor to Start 1, is invaluable, the release of the new defense doctrine of Washington contains some troubling ambiguities. 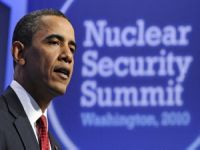 Signing the new treaty to reduce nuclear weapons between Russia and the United States is extremely important not to be welcomed by the progressive camp as a benefit to mankind. After all, as Karl Marx wrote, the military consumer "in the economic sense is exactly the same as a nation that lies part of its capital in the water." Over the years, supporters of the arms race said that the increase in military spending meant increased war production and, consequently, expansion of the labor market.

At first glance, the argument that rocked the Keynesianism of war, was of an implacable logic, because it was supported in historical evidence such as the militarization of Nazi Germany that ended unemployment in the country. In the 1960s, however, V. Leontiev, an American economist, showed the fallacy of imperialist reasoning. Calculating that a reduction in military expenditures of $8 billion would liquidate 254 thousand jobs, the author found that a reorientation of that amount in the civilian sector would create 542 thousand new jobs, that is a reduction of 288 thousand unemployed in the U.S. One can see that unemployment is constitutive of a specific mode of production and not the absence of war. These are consequences of a constant game of reinforcement of hegemony.

If the new nuclear disarmament treaty to succeed the Start 1 is of value, disclosure of the new defense doctrine contains worrying ambiguities. Presented as a strategy that would serve as a water of division between the administration of Barack Obama and George W. Bush, the document at the same time reduces the scenarios in which the U.S. would use its nuclear arsenal, and points to a flawed multilateralism.

While affirming that it will not utilize nuclear attacks on countries which adhere to the Non-Proliferation Treaty (NPT) and other international agreements, Obama admits the possibility of an atomic strike against Iran and North Korea. The use of force unilaterally whenever it deems necessary, does not reorganize the foreign policy left by the Republicans. Rather, it reiterates the legacy with a speech supposedly moderate and conciliatory.

The earlier resolution of the UN Security Council would give the U.S. the right to take military action against the two nations to punish them for their resistance to external inspections and what legal basis gives them permanent authority to require sovereign States unconditional adherence to the terms of any agreement? Indeed, there are other countries that possess weapons of mass destruction, such as Israel and India, but this does not seem to worry the U.S. president.

Israel, it is worth remembering, not only refused to sign the NPT , but with the full support of the United States ignored the decisions that invalidated the annexation of East Jerusalem and Golan Heights, and demanded the complete withdrawal from the territory of Lebanon. And the Security Council has never invoked Section 6 of the UN Charter that foresees the use of force in cases of threats to peace and security.

In the geopolitical chessboard, as in chess, players move their pieces alternately, falling to the primacy of the initiatives to those who play with the whites. Brazilian foreign policy, to the despair of an inferiority toward the opposition, has shown great skill in the use of pawns, queens, rooks, Bishops and Knights. Before defining the required balance, there is the urgent need to specify the real meaning of what constitutes terrorism and how it moves between the houses. Celso Amorim knows that the less visible the interventions, the more time consuming and deep they usually are.