Anatoly Fyodorovich Dobrynin was a Russian statesman whose name always had and has considerable recognition in the west. He was quite the statesman as Soviet Ambassador to the United States, serving from 1962 to 1986, and most notably during the Cuban Missile Crisis. He was appointed by Nikita Khrushchev and served as Soviet Ambassador to the US during the terms of six US Presidents (Kennedy, Johnson, Nixon, Ford, Carter and Reagan). 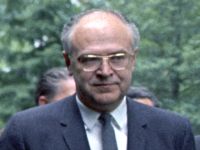 He was the son of a plumber and his mother worked as an usher at Moscow's Maly Theater, something that permitted Anatoly the opportunity to get in to see performances for free. Anatoly Fyodorovich Dobrynin was born on November 16 1919, and was trained as an engineer at Moscow Aviation Institute. He was offered a job at a plant run by AS Yakovlev, designer of the Yakovlev fighter planes.

Later, since the Soviet Union was undergoing shortages of diplomatic personnel owing to the war effort, Stalin ordered the recruitment to the Foreign Ministry of technicians rather than intellectuals. Dobrynin – despite his lack of knowledge of foreign affairs or indeed foreign languages – was selected to study at Moscow's Higher Diplomatic School.

In his memoirs he recalled that his training consisted of a combination of rushed language instruction and drilling in diplomatic etiquette. He practiced his language skills by reading copies of the Daily Worker.

Dobrynin served at the Soviet embassy in Washington from 1952 to 1955. Later, at the UN, he was Dag Hammarskjöld's Under-Secretary for Political and Security Council Affairs, attending the Geneva summit conference in 1955 and the Kennedy-Khrushchev meeting at Vienna in 1961.

He was appointed ambassador to the United States in March 1962 at the age of 42. When Dobrynin first arrived in Washington in 1962, Time magazine reported that the "tall, polished" young diplomat seemed "far more relaxed", than his predecessors, and noted that he and his wife Irina even dressed like Americans. His service during the Cuban missile crisis was critical, as the world came closer to nuclear war than ever before in history.

American spy planes had sited missile silos in Cuba, prompting the Kennedy administration to order a naval blockade of the island. Following the shooting down of an American U-2 spy plane on October 27, the joint chiefs of staff recommended that the government proceed with a plan for air strikes followed by a full-scale invasion.

Dobrynin received a visitor at the time, Robert Kennedy, who told him those sites had to be removed immediately. He told Kennedy that NATO had missiles in Turkey, and suggested a quid pro quo: if the Americans would pull their missiles out of Turkey, the Soviet Union would reciprocate by removing theirs from Cuba. A cable from Dobrynin to Moscow quoted Bobby Kennedy as saying: "If that is the only obstacle... then the President doesn't see any insurmountable difficulties in resolving this issue."

The agreement was made for the Soviet Union to withdraw missiles from Cuba. Within months NATO dismantled its missile installations in Turkey and the threat of nuclear war was averted.

The ambassador recalled that before the U.S. election of 1968, Richard Nixon was feared by Moscow for his rabid anti-communism. Later a warm relationship developed during the Nixon administration. Nixon developed so warm a relationship with his Soviet opposite, Leonid Brezhnev, that, by Dobrynin's account, the two men felt that they had more in common with each other than with their own countrymen.

It was largely via the channel that Dobrynin and Henry Kissinger, Nixon's National Security Adviser, drafted the 1972 anti-ballistic missile (ABM) treaty – the key international guarantor of nuclear stability for 30 years.

After Gorbachev replaced Dobrynin, he joined the Secretariat of the Communist Party of the Soviet Union (CPSU) and led the international department of the CPSU Central Committee for two years. The dissolution of the Soviet Union was, in Dobrynin's view, an avoidable tragedy, the product of the blunderings of "our incompetent but highly ambitious leaders" who had been lured by Western flattery into betraying their country's interests. In Dobrynin's recollections, he "accepted the Soviet system with its flaws and successes."

"The Members of the Security Council were deeply moved by the passing away of a distinguished Soviet and Russian diplomat, Ambassador Anatoly Dobrynin. They noted Ambassador Dobrynin’s significant contribution to promoting international cooperation. In the course of his illustrious career, Mr. Dobrynin has served as Under-Secretary-General of the United Nations. As Ambassador to Washington, he played a major role in saving the world from a nuclear disaster during the crisis of October 1962.

The Members of the Security Council expressed their sincere condolences to the family of Anatoly Dobrynin, as well as to the Government of the Russian Federation."