Russia, the Country of Space Cabbing

When Yegor Gaidar and his government along with a thousand of economic advisers from the US and Europe (this fact is never mentioned) made the Russian military industrial complex collapse, engineers, construction designers, highly qualified specialists, professors and cosmonauts became gypsy cab drivers. They picked up passengers in their old Russian cars to save their families from starvation. 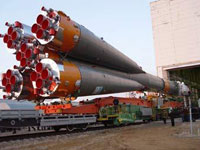 Russia, the Country of Space Cabbing

That period is believed to be the time of the democratic development and beginning of large-scale reforms. Some people may believe it, but I think that this was the beginning of stagnation much larger than the one associated with Brezhnev. This is especially obvious if we look at the development of space research. The things that were happening beyond Earth are hard to hide behind lofty speeches if you are willing to take a closer look.

April is the best time to lift your head up and look at the stars that Yuri Gagarin made closer to us in April of 1961. This was the time of Brezhnev’s stagnation.

At the time, interplanetary automatic stations were launched to the Moon, Venus, Mars and even Halley's Comet (a wonderful experiment). Not everything was smooth, but in those years of “stagnation” we received unique information that let the science rapidly develop.

Dozens of scientific satellites were launched on a regular basis. They studied the areas near Earth, pierced radiation belts and conducted meteorological observations. Again, not all those projects were successful, but the progress was obvious. Russians could turn their TVs or radios on and learn all about it.

Finally, all military might of the USSR was based on space systems that not only monitored potential enemies but also functioned as control systems for all rocket complexes that guaranteed the country’s safety.

These systems were the ones to take a blow from Gaidar’s government. Since then, military space has never recovered. Present attempts to revive military grouping at orbits do not bring results because they require completely new equipment which Russia does not have and will not have in the near future since the “space foundation” has been destroyed. I am talking about fundamental research that serves as the basis for all space programs, from biological to military ones.

It was the fundamental science that allowed us to go into space. It allowed rapid development of piloted flights and helped the humanity to look at the stars and Universe. What do we see there now?

It turned out that the same stars are much further from us now than they were 50 years ago. It happened because we started looking at them through “dollar glasses” that not only made us blind but emptied our minds. The evidence is in the obliteration of fundamental space research in the country that showed the humanity the path to the Universe.

Galimov, a famous academician, head of the Institute for Geochemistry and Analytical Chemistry has a merciless opinion: “These were 20 years of fruitless efforts.” In his book, the scientist talks about all programs connected to Russian space research. None of the programs targeted at the Moon and planetary studies have been completed. The same is true for any space projects connected to profit making, or, to be more exact, to attempts of making money on space.

Astronautic science is not capable of developing under the so-called market conditions created in Russia. A good example is tourist travel to the International Space Station. Americans do not have enough room on their Shuttles to accommodate tourists (although their spacecrafts are larger than Russian Soyuz) while Russians were eagerly preparing millionaires and their wives for flights and sending them to orbit. Naturally, for US dollars.

It makes me sad to look at Russian cosmonauts who turn into cab drivers who take big shots to space. I feel sorry for Russian guys who devoted themselves to a dangerous and wonderful profession but have to serve as cab drivers, just like in the early 1990s.

At least tourist travels have been cancelled.

Galimov makes the following conclusion: “Russia is still a leader in terms of the number of launches, but still none of the devices are of scientific nature. The US makes half as much launches and has four scientific devices, i.e. 25% of devices launched in 2008. To match this, we have to launch eight scientific devices. In 20 years we have not launched even a half of what the US launches in the interests of science in a year.”

The scientist is not entirely correct. Russian rockets take to orbits scientific satellites for India, China, Japan, Europe, North and South America on a regular basis. All these launches are paid for by the clients. It seems that Russia must be making a lot of money. But where is it ? What is it spent on?

It is hard to believe that Russian space officials are involved in charity.