Exposing Israel for What It Is

If the international media has decided that Israel’s illegal policies are a no-go area, then let someone bring the news to the people of the world so that they can judge for themselves. Take for example, Israel’s recent approval of over 3,000 new homes for Israeli settlers in Jerusalem, the destruction of Palestinian property by settlers and an act of terrorism within Gaza. 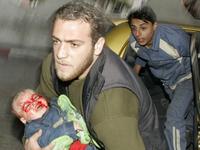 Exposing Israel for What It Is

The alleged act of terrorism in Gaza took place on Wednesday April 7, when according to eye witnesses quoted by the International Middle East Media Center, Israeli tanks advanced 500 metres into the northern Gaza Strip, opened fire against civilians’ homes near Jabalya and sent bulldozers to destroy crops and trees.

Despite pressure from its principle ally, the United States of America, to cease construction on colonies in occupied land and land which under international law does not belong to Israel, the policy of expansion continues apace. In East Jerusalem, according to the Palestine Liberation Organization, Israel has recently approved projects to built 3,226 new homes for Israeli citizens and there are plans drawn up in the Jerusalem Municipality for 50,000 new homes in the coming months.

This, in addition to the approval of 1,600 new homes last month.

According to the International Solidarity Movement, on Wednesday morning Israeli fascist settlers destroyed a Palestinian property belonging to the Al-Kurd family at Sheikh Jarrah, East Jerusalem. Despite photographic and eye witness evidence, the police officers who were called to the scene refused to look at the destroyed property or to arrest any of the settlers, deciding instead to take away two young Palestinian men.

Palestinian children thrown into the street

Meanwhile, also in Sheikh Jarrah, 475 Palestinian residents are about to be evicted from their homes by Jewish settlers, according to the same source. These Palestinians are from 28 families whose houses were given to them in 1956 under a joint project run by the UNRWA and the Jordanian Government.

60 Palestinians, including 40 children, have already been forced from their homes by fascist Israeli settlers and are forced to live outside on the sidewalk with nowhere to go, being harassed daily by the racist settlers and members of the police force.

International law is very clear on where Israel stands

Article 46 of the Hague Convention prohibits confiscation of private property in occupied territory. Article 55 of the same Hague Convention stipulates “the occupying state shall be regarded only as administrator and usufructuary of public buildings, real estate, forests, and agricultural estates belonging to the hostile State, and situated in the occupied country. It must safeguard the capital of these properties, and administer them in accordance with the rules of usufruct”.

Article 49, paragraph 6 of the Fourth Geneva Convention explicitly stipulates that “the occupying power shall not deport or transfer parts of its own civilian population into the territory it occupies”.

UN Security Council Resolution 465 (1980-unanimously adopted) made it clear that “Israel’s policy and practices of settling parts of its population and new immigrants” in the Occupied Territories constitutes “a serious obstruction to achieving a comprehensive, just and lasting peace in the Middle East”. The Security Council called upon Israel to “dismantle the existing settlements and in particular to cease, on an urgent basis, the establishment, construction or planning of settlements in the Arab territories occupied since 1967, including Jerusalem”.

The 2004 ruling of the International Court of Justice in The Hague July 9, 2004 declared that “Israeli settlements in the Occupied Palestinian Territory, including East Jerusalem, are illegal and an obstacle to peace and to economic and social development [... and] have been established in breach of international law."

While it is true that not all Israelis favour these policies, it is a fact that the Israeli Government of Prime Minister Netanyahu is behind this illegal policy of expansion which does nothing to engender a climate of peace in the region, it rather sows the seeds of hatred and more violence for years to come. If the international media wishes to turn a blind eye to this, it is time someone started informing the people of the world as to what is happening.