Fighting Evil With a Hand of Steel

The difference between terrorists and common criminals is that a terrorist has a cause and a murderer is a common criminal. A terrorist has an ideal and tries to garner sympathy within public opinion often by sparing civilian casualties and making his statement through attacks on material targets, or at most military ones. A coward hides behind women to do his dirty deeds. Ladies and gentlemen, read the truth about the Chechen terrorists. 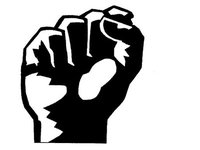 Fighting Evil With a Hand of Steel

Many terrorist organizations over the years had these characteristics and even garnered international support: NORAID for example, managed to obtain funding from well-meaning New Yorkers (mainly) and East-coasters in the USA who thought they were helping the IRA against the British oppressor. In fact what they were doing was to finance bomb attacks against civilians in commercial centers (only on 9/11 did they see what type of people they had been supporting: terrorists).

The list is long and the arguments rage as to who or what is a terrorist and who or what is not. Hezbollah and Hamas, for instance, are not classified as terrorist organizations by the Russian Federation, neither is FARC.

The Chechen terrorists are not terrorists, they are common criminals and cowards. They do not have a cause, they do not have a country and they do not enjoy popular support. They do not have a regional power base. Their country does not exist (a free and fair democratic vote in 2003 provided a clear message that 95% of the population of Chechnya wanted to remain within the Russian Federation) their own people do not want them, they are not heroes, but rather hide between women who have been sold for cash by their families, often mentally retarded women. There is nothing romantic, there is no cause and there are no heroes.

The Chechen and Caucasus terrorists are the worst type of filth that exists on the face of this planet. The leaders not only hide behind debile women to carry out their work but also take the name of their religion in vain and are traitors to their people and their Republics.

Not only are they cowards, they are also blasphemers and traitors.

The Russian Federation must therefore come down hard on this scourge, eliminating these elements like the vermin they are. After all, what does one deserve, he who buys a girl from her family, indoctrinates her to give up her own life and then pretends the whole thing is about some God (Allah forbids murder) or some territory (95% of the civilians in the Caucasus want to remain inside Russia)?

A hand of steel must smash this filth and liquidate its operationals once and for all, an implacable will must form the backbone of the Russian Federation and the world against this scum in a common resolve to exterminate the cockroaches in the sewers where they live.

Somewhere, somehow, engagement must be made to form a basis of discussion and dialogue for the intelligent ones who control the poor fools who give up their futures convinced they will go to a Paradise somewhere, for them to become part of the solution.

This is why the Russian people will come through this, as they have come through every challenge that history threw at them. While the people come out of themselves, the authorities must be implacable and destroy these elements with a hand of steel.

No Russian, or anybody else, likes to celebrate the death of a human being, whoever it is. However, to be able to enjoy human rights the notion exists that you have to act like a human being.