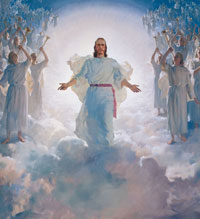 Not all prophecy in Scripture has been fulfilled yet but the Second Coming of Jesus Christ was totally fulfilled in the first century. The second coming of Christ had to do with destruction of the Jewish Age and the establishment of Christ's Kingdom.

Some may argue that Jesus was talking about His glory that His disciples beheld on the Mount of Transfiguration. But that had nothing to do with Jesus coming back to establish His Kingdom. Besides, as one commentator put it, it’s obvious that the people with Him would be alive for the little time it took for Him to go up the mount and come back. It wouldn’t be a big deal for Jesus to say that some of them would still be alive before He comes down from the mount.

Jesus wasn’t meaning His trip up the mount and back when He said that some would not see death before He returns in His Father’s glory. He was referring to His second coming. Which means that the second coming occurred in that generation, not some thousands of years later.

Jesus said that when Jerusalem is surrounded by armies and is destroyed that would be the time of His second coming. Jesus said that the Gospel will be preached to every nation before He comes. The Apostle Paul says in a passage in Colossians that the Gospel had already been preached to every nation! By every nation, Paul meant every nation in the known world of that time. This Gospel would be preached to all nations as a witness to them that God was through with Israel as a nation for its ultimate disobedience. That is why Jesus Himself said the "axe is laid at the root" meaning the destruction of the nation was near.

God is still committed to His elect individual Jews who turn to Christ for salvation. But, He is through with Israel as a nation. The last time God prophesied that the Jews would return to the land was fulfilled after their return from the Babylonian captivity.

We read in the Book of Joshua 21:43, 45: "And the Lord gave unto Israel all the land which He swore to give unto their fathers; and they possessed it, and dwelt therein. There failed not ought of any good thing which the Lord had spoken unto the house of Israel; all came to pass." Thus, there is no promise concerning the land that still awaits any fulfillment.

The modern state of Israel today has the right to exist like any other nation, but it does not have the right to territorial conquest and control in the name of Zionism.

The New Testament refers to the Christian Church as the "Israel of God" (Galatians 6:16). There is good reason to believe that some of the Old Testament descriptions of God's future dealings with Israel are already being fulfilled spiritually in and through the Christian church which is made up of both Jew and Gentile believers in Christ inheriting the same (not different) promises.

Many evangelical Christians believe (wrongly) that the "Great City" in the Book of Revelation, which God destroys in His wrath and which is referred to figuratively as Babylon, is Rome. They believe it is Rome because the city is described as being surrounded by seven hills.

However, Jerusalem, also, is surrounded by seven hills. The proof that Jerusalem is the city and not Rome is found in Revelation 11:8 where we read, "And their dead bodies shall lie in the street of the great city, which spiritually is called Sodom and Egypt, where also our Lord was crucified".

Jesus said that every eye will see Him at His return (that is everyone in Jerusalem at the time of its destruction) will know that Jesus was ultimately behind Jerusalem’s judgment and destruction.

In the Old testament when Babylon was destroyed the Scripture says that the stars of heaven fell and the Sun and moon turned their color. This is known as apocalyptic language in Scripture. Whenever a very major event affecting Israel happens such language is used. The Book of Revelation uses similar language also. Revelation is to be interpreted symbolically, for the most part.

The Roman armies surrounded Jerusalem from 63 AD to 70 AD (seven years) and destroyed Jerusalem, as Jesus predicted. In the middle of those seven years ancient historians like Josephus records that Jews who believed in Christ had an opportunity to escape Jerusalem so that they would not be killed. These Jews escaped to Pella in Jordan.

The ancient Jewish historian Josephus was allowed by the Romans to describe and write about what was happening in Jerusalem at the time of its siege and destruction by the Roman army. Among the things Josephus describes are the miraculous signs that occurred in Jerusalem prior to its destruction. All of this was prophesied by Jesus.

The famines and earthquakes that Jesus said would precede His return also occurred during the first century and some of these are recorded in the New Testament (i.e. the Book of Acts).

What about the supposed covenant of peace with Israel made by the Anti-Christ that the Book of Daniel talks about? There's no covenant of peace with Israel. As the great and eminent Bible commentator of old John Gill says about Daniel 9:27: "... but this is to be interpreted of the Roman people, spoken of in the latter part of the preceding verse; who, in order to accomplish their design to destroy the city and temple of Jerusalem, made peace with many nations, entered into covenant and alliance with them, particularly the Medes, Parthians, and Armenians, for the space of one week, or seven years; as it appears they did at the beginning of this week". Daniel 9:27 says the covenant is with "many". It has nothing to do with a covenant with Israel.

Before 70 A.D. Jews who became Christians still had to follow certain Jewish rituals and traditions (i.e. Timothy was circumcised and that by the leading of the Apostle Paul himself). The Kingdom had not been established yet. But, Gentiles, who during this time became Christian, were not under obligation to follow Jewish customs and rituals and traditions regarding the ceremonial laws.

In the Book Hebrews the writer said that “we are receiving a Kingdom”. The Kingdom had not yet been officially established before the destruction and judgment on Jerusalem which Jesus prophesied and which occurred in 70 AD.

After 70 A.D. and the establishment of the Kingdom none of the ceremonial laws applied even to the Jews who had converted. All the Jewish ceremonial laws came to a permanent end.

Now, the Kingdom is growing and will one day fill the earth. The Scripture teaches that at some point in the future the final judgment will occur. All the wicked will be once and for all destroyed and the Son will give the Kingdom over to the Father and God will be all in all.

Before 70A.D. believers who died remained in a state of sleep. After 70 A.D. believers who died had their souls resurrected and united with their new and eternal bodies prepared for them in heaven, as Scripture teaches. Christians who are alive now, when they die, will not remain in a state of death but their souls will instantly become immortal and will also be united with their new and eternal bodies reserved for them in heaven. This is the on-going process of the Rapture.

The Apostle Paul says in his epistle to the Corinthians that Christians have an eternal body (not a temporal body, but an eternal body) reserved for them in heaven (obviously the heavenly body is being kept for the time when their souls are resurrected).

In the context of Scripture Satan is now bound for a “thousand” years only to the degree that he cannot deceive all the gentile nations as he once did. Outside that limitation, Satan is as free to do his mischief as before.

In the Book of Daniel it says that Christ's Kingdom will be like a rock cut out of a mountain not by human hands, and that this rock will grow and grow until it fills the whole earth. Christ's Kingdom doesn't fill the earth suddenly but gradually. Christ said that His Kingdom would be like the leaven in bread which spreads gradually throughout the whole bread.

They only want thrills and the frills. They're looking for a literal, glitzy, Kingdom like the disciples in Jesus' day thought He would establish.

This view that Christ's second coming occurred in 70 AD during the destruction of Jerusalem is known as Preterist (or fulfilled) eschatology. There is much, much more to be said on this subject. Please check out the various articles, views, and interpretations concerning preterism here.

Also, the reader is encouraged to read "The Bible Vs. The Traditional View of Hell"

The writer is greatly indebted to the writings of the Rev. John L. Bray (Christian evangelist) for coming to know and understand this view of biblical prophecy. Evangelist Bray is now retired but his book "Matthew 24 Fufilled" continues to be enjoyed by readers.

The author, Babu G. Ranganathan, has his bachelor's degree with concentrations in theology and biology and has been recognized for his writings on religion and science in the 24th edition of Marquis "Who's Who In The East". The author's writings may be accessed at: www.religionscience.com