When Those Who Invoke Allah Become the Devil

Call him God, call him Yahweh, call him Allah, call him or her Shiva, Mercury, Zeus, Venus, Apollo, Aphrodite…peoples of the world have been labelling the same Being(s) in so many ways over the centuries since the beginning of Humanity. Normally, God is invoked in the name of Good and to protect Humankind. Today in Moscow, those who invoked Allah became the Devil, goaded by the evil desire to destroy the human spirit. 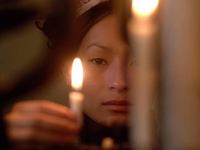 When Those Who Invoke Allah Become the Devil

It is not for no reason that the Christian Church likens its faithful to sheep, a flock to be shepherded. And this is exactly what the “people” (?) behind today’s outrage in Moscow have done. I am not speaking only about the two Shahidis, Islamic women who seek revenge for the deaths of menfolk in their families. These are more the victims, although what they did was sheer unadulterated evil, murdering 37 innocent civilians going about their daily lives, when what they are seeking revenge for is the liquidation of terrorist criminal elements who work against the State and who use the cause of international terrorism to perform illegal business: trafficking, smuggling, kidnapping…

Hardly a justification. What good are terrorists doing, terrorists who are not supported by the vast and overwhelming majority of the citizens in their Republics? What are these criminals bringing to society? What contribution do they make to their communities?

A worse evil is committed by the families that sell these women, their daughters, to the terrorists who brainwash them into taking their own lives. And an even greater one is perpetrated by those to take and twist the noble messages in the Qu’ran to suit their needs. The Qu’ran is a book of peace, like the New Testament of the Christian Bible (as opposed to the hatred, fire and brimstone eye for an eye of the Old Testament).

While the Old Testament is based upon fear, the New Testament and the Qu’ran are based upon peace and love and those who read either books will bear witness to the fact that these two religions preach good and tolerance, not hatred, murder and death: Evil.

What we saw today in Moscow was not Allah, it was not the Qu´ran, it was not religion. Religion is about creating norms on several levels for people to reach out to something higher, superior, to explain who we are and where we came from, where we are going to, and to set up support mechanisms for questions we raise about life, about love and about death. A hand to grasp in the darkness, a soothing voice when we are afraid.

These different levels are fluid enough to encompass the believers, who know God/Allah is out there waiting for us in Paradise, are fluid enough to provide comfort for those who need to believe in something else because their reality is unbearable and are fluid enough to at least set norms for decent behaviour, given that the human being seems incapable of doing so on her/his own.

What we saw in Moscow today was none of this and none of these. It was no attempt to build, to create, to spread love and tolerance, to preach peace and provide support, provide comfort. It was the result of misery of mind, misery of spirit, an absence of love, an absence of common decency, the result of pigs who sell their own daughters to other pigs who desecrate Islam with their perversion and filth and who in turn warp the minds of the pigs who blow themselves up and go straight to Hell for the rest of eternity.

Those they murdered smile down on them from Heaven. And I apologise…to pigs.