Israel Gives The Finger To The USA

It is a case of the dog biting the hand that feeds it. After years of protection by Big Brother USA, covering up for its having nuclear warheads when Iran cannot even have a nuclear program, looking the other way when shocking war crimes and massacres of civilians are committed, when pregnant Palestinian mothers are left to die in the streets, Israel sticks up the middle finger in a classic display of pig-headed arrogance by Netanyahu at AIPAC. 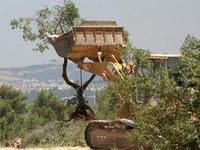 Israel Gives The Finger To The USA

To cap it all with ever-increasing displays of pig-headed arrogance, East Jerusalem was annexed by Israel arbitrarily in 1980 and today Israel continues to build settlements there in contradiction of the UNSC Resolution 478, claiming that Israel respects and follows the Resolutions it feels like respecting and ignores the others, just as Israel sits on 200 nuclear warheads in the Negev Desert in total contradiction to all the norms of non-proliferation.

In short, as with Hitler’s Aryans, Israel declares to all that its people are special, being above the legal parameters governing everyone else and Israel follows the arrogant precept that as a State it does not have to behave as a responsible member of the international community because basically it does as it pleases, adopting policies such as lebensraum (living room), treatment of Palestinians as untermenschen (sub-humans), occupation of territory, arbitrary murder, destruction of property.

Immediately after the US Secretary of State Hillary Clinton declared that Israel had to stop building illegal settlements (far from stopping, they should be either handed over to the Palestinians whose lands were stolen together with a hefty reparations payment or else demolished), Israeli Prime Minister Benjamin Netanyahu responded with the most shocking display of pig-headed arrogance in his address to a cheering AIPAC, claiming that Israelis were building in Jerusalem 3,000 years ago and continue to do so now.

So to whom do the members of AIPAC owe their allegiance? To Tel Aviv or to Washington? They cheer the Prime Minister of Israel who comes to the United States of America to defy and spit in the face of its Secretary of State? These AIPAC members are patriots, or traitors?

On the chess board which constitutes the Middle East game, Washington plays by the rules, promising to guarantee the territorial integrity of Israel (ostensibly, we imagine, within the frontiers recognised under international law, not including one centimetre of the Occupied Territories). Nothing wrong with that (although the USA uses and abuses a cowardly and cynical gimmick of looking the other way when Israel starts committing acts of mass murder, massacres and war crimes).

Yet on the other side of the board, while Washington politely turns away smiling wanly, Israel plays with two Queens, ten rooks and as many knights as it feels fit to employ. While Washington claims Israel must stop building illegal settlements, the Israeli PM is in the USA being cheered by AIPAC claiming this is precisely what he intends to continue doing.

For any sane, clear-thinking citizen of the international community, there is one very simple way forward. First, Israel has to leave all the territory is occupies illegally (possibly paying for the rent of the territories in a phased withdrawal). The question of reparations for the occupation of this land is up to the Palestinians to claim as they see fit.

Simultaneously, all parties have to recognise Israel’s right to exist and thirdly, if the non-proliferation treaties are to be respected, then nobody can have nuclear weapons in the Middle east, and that includes Israel.

Three simple and easy steps which include nothing other than respect for the terms of international law. Is this so unreasonable to expect, or demand? Next step, engage Hamas, for it was democratically elected.

Until then all talk of peace and children growing up together and happy smiling families living side by side exchanging presents is utter claptrap, nonsensical whimsical fairy-tales by politicians who are acting like clowns. Who is going to extend the hand of friendship to a murderous thug who invades their house, steals their land, deports their family, kills their women, and shoots their kids in the eyes with rubber bullets?

Or did the citizens of the USA not know any of this was going on?