What is Wrong with Israel?

One thing is claiming to be the victim all the time, over centuries. Another is acting in the same way, or worse, as those that are criticized for treating Jews badly. Certainly, Israel has the right to exist as a member of the international community…surely, if it behaves as such? 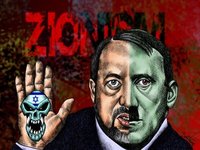 What is Wrong with Israel?

An eye for an eye, a tooth for a tooth, right? Human rights for those who behave as human beings, then. Obviously. And therefore those nations which do not behave as members of the international community, logically, should forfeit their rights to membership, just like a member of a sports club is banned if (s)he does not pay the fees or breaks the rules.

So why is Israel always playing the victim card, when it violates international law? And if Israel accepts the notion “an eye for an eye” then it cannot complain when inevitably the type of violations it commits daily go full cycle and are visited upon Tel Aviv. Can it? Ah! But to say such is anti-Semitism (an idiotic statement, because all the term means is “anti-Semitic” as regards Semitic languages, as per Hebrew and Arabic).

The main contributor towards the hatred in the international community towards Israel is not the Jews living their lives in Moscow, London, Teheran, Addis Ababa or Jerusalem, but rather, the actions of the state of Israel. Let us not pussy-foot around, let us have it out once and for all.

Israel tries to hide behind cowardly fences it builds for itself, namely making it a crime to question the existence of the Holocaust in many countries. Why the hysteria, why the exponential ultra-defensive posture regarding what seems to be obvious? For many of those who have visited concentration camps from the Second World War, there was never any doubt, until it became a crime to doubt.

Who is trying to cover up what? And why? Who made it a crime to speak about the African Holocaust, slavery, which was visited not upon 6 (?) million souls, but probably nearer to 70 million?

The way Israel behaves these days raises serious questions as to the integrity of this “people”, if indeed Israelis can be called a single people and not a motley collection of Ethiopians, Finns, Frenchmen, Dutchmen, Americans, Palestinians and Russians, to name but a few.

While the actions of individuals must be separated from those of the State, it is clear that Tel Aviv has a problem, a serious problem and a problem which places in question any continued goodwill towards the State of Israel’s right to exist, as it stands today, among many in the international community.

The State of Israel was proclaimed in 1948 by David Ben-Gurion, and it gained the blessing of the vast majority of the members of the international community at the time. Over the years, it suffered attacks as a result of the abominable treatment of Palestinians (who were thrown out of their homes and lands as Jewish settlers started to arrive) and due to overwhelming military backing from the USA, managed to push back its original borders to areas claimed as a “Greater Israel” in Biblical texts.

However, we are not living in Biblical times and there exist norms such as the rule of law. Therefore, it comes as no surprise that the Secretary-General of the UNO calls for an immediate halt to the illegal programme to build 1,600 new housing units in East Jerusalem. Those who know Benjamin Netanyahu as an inconsequential office boy half a century ago would not be that surprised, because Benjamin Netanyahu has never been anything more than the puppet of the gray forces controlling him.

Not only are the new settlements illegal under international law, they also violate the terms of the Roadmap for Peace.

Apart from this, the Gaza blockade against innocent civilians, including women and children, is contributing towards fuelling more anti-Israeli hatred and worse, towards the creation of criminal networks supporting an illegal economy, according to UN reports. Or is this what Israel wants?

For every day that passes, the international community feels more admiration for the resilience and courage of Gaza citizens and more and more sullen hatred for the pariah regime which builds illegal colonies and strangles the rights of civilians, including women and children.

What is wrong with Israel?

A country built on the basis of goodwill after the horrific and barbaric treatment meted out to Jews and after the 6 (?) million milestone became accepted finally among the international community after take 2 (WW2), Israel and Israelis could have done far better in terms of managing the process with a view to implementing a two-state policy in the region.

While there is no doubt whatsoever that the Holocaust took place (not only in Germany but also in the three Baltic States, Poland, Romania and practically every other country to have joined NATO recently… is this a pre-requisite for membership?) and while Israel’s right to exist is unquestionable, it is also true that if Israel wishes to become a member of the international community (and a very recent member at that) then it has the obligation to respect international law. And when we speak of the Holocaust, we are referring to gypsies, Slavs and other groups considered as "sub-human" by the Nazis, including several religious groups and persons whose sexuality was expressed in ways considered deviant by the Fuhrer.

The flip side of the coin is giving the victory to the Palestinians in the hearts and minds of the international community, which is what has happened. Hardly an intelligent policy move by Tel Aviv and a tell-tale sign that Israel has lost the media war, which in journalistic terms is paramount to losing air superiority in a conflict scenario.

The result is that Tel Aviv and Israel are today as isolated as Jews have ever been, but this time around not due to racism, rather because of pig-headed arrogance which will engender the response it deserves.