The Moral Misery of Former Leftists

Some feel satisfaction when someone who was on the left jumps the fence, changes field and turns to the right - as if to say: "I knew, you never fooled me," etc.. Etc.. Others feel sadness, the sad spectacle of those who play outside, with their values, their dignity - in exchange for a job, a recognition or a little space on television.  The truth is that we have come to learn that much of today's right wing was on the left yesterday. The other way is much less common. The right knows how to reward those that adhere to their ideals - and wages. Accession to the left is usually the conviction of ideals. 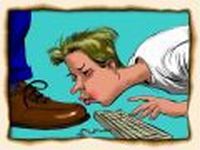 The Moral Misery of Former Leftists

The former leftist attacks the left with special fury, like someone attacks themselves, in their own past. Not only do they deny the ideas that guided them - sometimes the best time of their life - but they also need to show all the time, to the right all their powers, how they so hate the left, to which they will never relapse into that "poison" on which they were hooked. They can now be counted on in the front row, to combat what they were, with a commitment of those who "knew the monster inside," knows its corrosive effect and shown themselves as an extremist combatant fighting against the left.

They does not discuss the ideas they had or that others have. Otherwise they would only be making interpretations of what they used to believe and now don't anymore. No. They need to call the attention about the dependence that the "dialectic" and "class struggle" create, about the promise of a "society of equals without classes and without a State". They denounce, denounce any indication that bad habits can return, that any vacillation in relation to the themes that are apparently innocent or banal, such as university fees, a housing policy or support for a legally elected President could hide the poison of the viper which is "socialism", "totalitarianism" or "Stalinism."

They have become poor devils hanging around in spaces in which charities loan them to exhibit their past sins, and terrible morals, now overcome by the desire to behave like vigilante right-wing boy scouts. The language of newspapers, magazines, radio and television is full of ex-Trotskyists, ex-Communists, ex-socialists, unrepentant ex-leftists, enjoying space and salaries, repeatedly showing repentance in a depressing moral spectacle.

They adhere to the right with the fury of despair, defending theories more outmoded than ever, defeated, and then despair. They attack the Lula government, the PT, as if they were the reincarnation of Bolshevism, they find in each state action the "totalitarianism" in each social policy, "corrupting hand of the state", the "Chauvinism" of "populism".

They wander in the article interview, or blog round table, atoning for their past, adhering to the impetus that they once had to attack capitalism, now to defend "democracy" against its detractors. They write books of denunciation now with supposed academic seasoning with right wing publishing houses, shout from the rooftops about the "communist threat" - without which there would be nothing - it’s alive, hiding behind the PAC of my house, my life, the National Conference of Communication, of the Dilma - "once a terrorist always a terrorist."

They deserve our contempt, not even our pity, because they know what they are doing - and the wages at the end of the month will not let us lie, or feed their lies - and earn with that. They left the libraries, classrooms, demonstrations and leaflet distributions, for spaces in the media, for hugs from the right, from businessmen and heroes of the dictatorship.

They wander around like lost souls in organs of the press, they live the last breaths of their lives before they're buried without pity, or glory, forgotten as the lackeys they are, reduced by their subservience to those they believe are still in charge of them. They will die defeated, the destiny they chose in exchange for small and ephemeral glory for a few pennies. They crawl at the feet of a decadent elitist group before they rot in their defeat. Moral misery...people do not even know they exist, although they participate actively in their burial.