The president of Argentina, Cristina Kirchner, said in an interview with CNN that she believes that in Latin America there is "a sense" of "missed opportunities" with the government of Barack Obama in the United States. The declaration takes place a few days before her meeting with the U.S. Secretary of State, Hillary Clinton, scheduled for Monday in Montevideo, where both will attend the inauguration of Uruguayan President José Mujica. 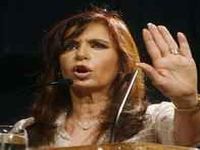 "I must say that there is a sense throughout the region of lost opportunities. No one expected a prince on a white charger. We had hoped, yes, for a sense of realism (...) with knowledge of what happens in Latin America and the needs the USA had and has a different policy in the region," Cristina said in statements transmitted yesterday, according to Reuters.

In her opinion, the 2009 coup in Honduras has affected the expectations of the region's leaders about Obama. The U.S. initially condemned the coup, but, unlike Argentina, Brazil and other countries, they ended up recognizing the elections promoted by the coup government.

"I am convinced that a different U.S. attitude would have led to different results. I think it was a blow to the region and the expectations that many had had with President Obama."

The Argentine president also talked about the territorial dispute with Britain over the Falkland Islands. "Today, we not only have the issue of sovereignty, but also the theft of natural resources," she complained, according to Associated Press. Cristina insisted on charges for violations of 10 UN resolutions (UN), urging negotiations with Argentina. "England has refused systematically to discuss them," she complained.

"There is no legal or geographical reasons to support the occupation of the Malvinas by the British," said Cristina, discarding the possibility of war between the two countries. "We're not in Iraq or in Afghanistan nor do we want to be. We're only on missions in Cyprus and Haiti. In other words, we have an anti-war task . And we refuse to bring troops where there are invasions," she emphasized.

Translated from the Portugtuese version by: