The Guardian Assimilated by the Absurdity of Kasparov

From time to time, a western newspaper gives space to Gary Kasparov, an Azeri who has a residence in New York and an apparent interest in stirring things up inside Russia. While it is understandable that he would prefer residence in the USA to Azerbaijan, his pretensions as regards Russia are curious, if not ominous. Who is pulling his strings? 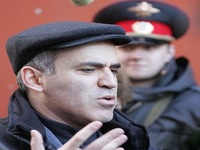 The Guardian Assimilated by the Absurdity of Kasparov

Giving space to Gary Kasparov is paramount to plying an alcoholic geriatric town crier on the verge not only of senile dementia but also endemic unemployment, with his bottle of Ripple and sending him bawling into the night after telling him his wife has run off with the milkman and won’t be coming back.

The result is the same – the inane ramblings of a disturbed and warped mind desperate for recognition. In short, reading the whining, snivelling diatribes of Kasparov smacks uncannily like reading the words of Saakashvili, another wannabe Russian from a failed state who has the maniacal delusion that he is someone.

The question is why the Guardian newspaper bothers to print the opinion of someone whose political pretensions inside Russia amount to less than three per cent of a voting intention for his United Citizens Front in a free and fair democratic vote. The article published in the UK newspaper The Guardian on February 23, 2010, entitled “Don’t cosy up to Russia, Europe” is perhaps as puerile and inaccurate a piece as Kasparov has written to date.

Yet again, Kasparov refers to the “stifling” of the opposition and of the free media in Russia, carries on predictably to accuse Russia of “bullying” its neighbours and ends with a hotchpotch of agents provocateurs and failed politicians who underwrite his nonsense. Remind me not to bother reading the Guardian again…another one bites the dust.

Regarding the “stifling” of the opposition, Kasparov forgets to mention that there is a myriad of opposition parties in the Russian Federation today, among which are Ziuganov’s Communist Party, or Zhirinovsky’s Liberal Democratic Party of Russia, both of which garner far more votes that he will ever hope to get in a thousand years. Kasparov knows that, but the Guardian doesn’t.

Regarding the “stifling” of rallies, Kasparov forgets to remember that he often stirs up trouble by holding illegal demonstrations without applying to the municipal authorities, as is the norm in any civilized State. Kasparov knows that, but the Guardian doesn’t.

Regarding the banning of demonstrations, Karparov forgets to refer to the fact that Prime Minister Putin has stated that anti-Government demonstrations are a useful way to engage with the people and listen to them…because they occur. Kasparov knows that, but the Guardian doesn’t.

As far as the media is concerned, I work for four Russian media outlets, the English version of PRAVDA.Ru, MoscowTopNews, RussianSentry and am Director and Chief Editor of the Portuguese Version of PRAVDA.Ru. Never have I received any directives at all as to what I can write or publish, never have I received a single restriction, never have I been given any instructions not to place this or that, or indeed to write this or that. The flow of information is not controlled, it is perfectly free.

Of course Kasparov knows that, but the Guardian doesn’t.

Finally as regards his comments on Georgia and Russia bullying its neighbours, it is amazing that a newspaper with the reputation of the Guardian would purport to repeating the same lie time and again to see if someone will eventually believe it, following the adage that if water drips for long enough in the same place, it will bore a hole through stone.

Otherwise, why would they publish Kasparov’s diatribes, and air them as if they were credible opinions, as if from an opinion maker? The Guardian, in so doing, has descended to the realms of the bought, assimilated tabloid press with nothing to do except try to make a profit from that tidy little package of half-truths presented to its readers every morning. How sad.