Haiti: The Need to Stay on Track

This afternoon, UN Secretary-General Ban Ki-Moon and Special Envoy President Bill Clinton launched a joint appeal for international donors not to forget Haiti, as the rebuilding and aid efforts enter their second month. While the media circus has moved on, the World Health Organization singles out Cuba for its fundamental contribution towards the healthcare and well-being of Haiti’s citizens. 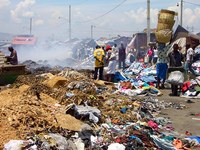 Haiti: The Need to Stay on Track

The figure PRAVDA.Ru gave for the casualties just days after the earthquake was 200,000 while other international media outlets were speaking of 50 to 100,000. Today, the official figure is over 200,000 dead and a further 300,000 injured, over 1 million homeless and over 2 million dependent upon aid. 1.2 million are living in temporary camps and extreme weather conditions are about to strike. Right from the beginning, Pravda.Ru has stayed on the story, knowing that the media circus would soon get bored and drift away to find a new two-week adrenalin fix for the viewers and readers addicted to a drum-beat fix of hard and fast stories to pep up their lives.

However, for the sake of the people of Haiti, a massive reconstruction program is under way, which will take years, not months, to complete. As attention moves away from this devastated island, UN Secretary-General Ban Ki-Moon, Special Envoy President Bill Clinton and Under-Secretary-General for Humanitarian Affairs, John Holmes, launch a joint appeal this afternoon, reminding the international community of the pledges given after the UN called for a 575 million USD package in emergency aid three days after the January 12 quake.

The World Health Organization stated in its latest update that the Haitian Health Ministry was virtually decapitated by the earthquake, due to the fact that over 200 ministry staff members died when the building collapsed, apart from many healthcare professionals. “Haiti’s entire health system, from its infrastructure to the very staff and system that operated it, has been deeply affected by the Earthquake”, the WHO reports.

Today, the main structural needs to be addressed are providing shelter, the removal of rubble and the creation of basic sanitation networks, while healthcare has to be focussed around the post-operative phase, providing follow-up for patients who underwent surgery, rehabilitation services and rendering facilities and services in overcrowded situations.

Cuba praised
The WHO report highlighted the tremendous help offered by Cuba, which apart from training (gratuitously) 80 Haitian doctors per year, every year, sent 1,300 doctors, in addition to the hundreds of healthcare workers already providing assistance in Haiti. The WHO Representative for Haiti, Henriette Chamouillet, stated that “They are absolutely important” for Haiti. Praise which is well deserved, but hardly ever referred to in the international media.