HTS Hostage Issa Salomi Lived Off Base: SOS From the Island of Misfit Toys 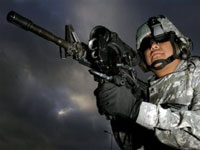 HTS Hostage Issa Salomi Lived Off Base: SOS From the Island of Misfit Toys

“As a taxpayer I find repugnant the gross negligence and criminal activity that takes place at HTS. People's lives are at stake!”

“Sad part is, this is not news,” said Human Terrain System observers. There are three known cases involving Americans living outside the wire in Iraq with girlfriends or family. Such was the case with US Army hostage Issa Salomi who was “definitely” living outside the wire (OTW) with his brother's family. Salomi's brother is/was a police officer in the local community, said a number of observers. Salomi has been in Iraq since 2008 and felt right at home roaming around OTW with the locals on his own. Salomi's Human Terrain System Team Leader (HTS, TL) knew he routinely went OTW without permission and escort.

This “should have been reported from day one, said all observers.

Reports indicate that other HTS personnel leave their forward operating base (FOB) without approval and relocate themselves with other Human Terrain Teams (HTT's). This of course, is in “total violation of the rules” said all observers. “Nothing is being done about it.” The problem appears to be with the HTS TL's who are not properly trained and frequently clash with HTT Social Scientists (SS) who think they are equivalent to the HTS TL's (they both hold the government pay-grade of GS-15}.

Many HTS TL's fail to counsel their charges or report issues to HTS senior management until the matter is out of control. Observers state that an SS recently returned from a truncated tour overseas because she was violating rules and refused to adhere to the HTS TL's instructions. The situation became so disruptive that the cognizant US military commander had to intervene to get her removed from country. Such behavior in most organizations would result in being fired, but, according to observers, she will likely get a teaching position since HTS is short on SS types and the person of interest happens to hold a PhD from Harvard.

Another US Army HTS employee was allegedly living outside the wire too and for that transgression he was removed from Iraq. But he was somehow promoted to the position of instructor. This individual was allegedly embroiled in the controversial firing of a female employee, said observers.

Observers state again and again that gender discrimination and sexual harassment is commonplace throughout HTS from HQ to FOB. This is specifically true for the HTS staff. The Director of the Exercise Division has had numerous reports about his behavior with the female students and staff. Complaints by female staff have been routinely ignored by HTS personnel in charge of training to include the new director. These personnel, usually retired colonels, bring great discredit to their former service branches. Those who would excuse/defend this behavior chalk it up to good natured, loose humor typical of the male military culture. One wonders if these “senior” personnel have daughters, grand daughters, or nieces of their own.

The lack of diversity and the premeditated maintenance of a hostile working environment for females has been brought to the attention of HTS senior management many times. And, of course, the allegations have been ignored each time.

Observers note that few of the HTS SS personnel are actually trained for the type of work they will conduct overseas nor are they accustomed to working with US military personnel. This has been a critical flaw in the HTS program. They also note that there are few qualified SS types on the program and even fewer anthropologists which is why the American Anthropological Association is routinely ignored by HTS senior management. Observers note that the philosophy of HTS management w/retired officers one spot shy of Flag Officer status is this, “If you are a male and retired colonel you're qualified and more credible even if you have no background in the social sciences."

Apparently, this is an actual quote from one of the retired bird-colonels. It needs to be said that the bulk of retired servicemen and women who have worked for the country are not braggarts nor do they hold themselves to some higher divine standard because they opted to work in a military uniform. The good ones, the confident ones recognize that one not need wear a military uniform to protect and defend the American way of life. They know they performed above and beyond and now they are civilians and content. Are firefighters, police officers, FBI agents, foreign service officers, et al, any less deserving?

SOS, SOS to Congress and IG's

“Much of what is wrong with the program is in its lack of management. Many actions skirt the edge of ethics, some are blatantly illegal. Others, with proper smoke and mirrors, can be easily hidden or covered up before anyone with any authority finds out.”

“Our hands are tied. Each time someone tries to point out the illegal activities that are going on, someone within HTS hamstrings the investigation or appoints someone internal to check out the allegations. And and you know what happens when you investigate yourself.Worse still, people who try to improve processes is either fired or moved to a lesser position or pushed out. However, it is being hampered by lack of leadership, mis-management and cronyism. Attempts to hide problems (instead of fixing them) hamper progress. Too many are worried about selling the program verses putting in the time to make it functional. If you are on the road all the time, how can you establish a functional program? It can be a good program. The problem is our hands are tied and we need help, but don't know how to get it.