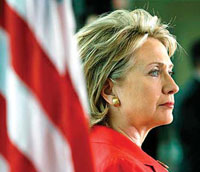 The U.S.-sponsored drive to impose new economic sanctions on Iran has nothing to do with the noble cause of limiting proliferation of nuclear weapons on the planet. It is directly linked to the U.S. military doctrine of establishing 'full spectrum dominance' - i.e., military dominance on land, sea, air, and outer space over all other countries in the world. The logical extension of this doctrine is that only countries firmly allied to the U.S. government should be allowed to acquire nuclear weapons or to even develop the capacity to do so.

Iran and North Korea are being subjected to economic sanctions, calls for more sanctions, and even threats of military aggression against them The reason is again simple: They are not U.S. allies.

The principal of national sovereignty includes non-interference in a nations internal affairs by outside powers. It is an important cornerstone of real international peace and security, and among other things is related to accepting and respecting the cultural, political, and economic diversity of the world.

A key element of national sovereignty is that wars of aggression against other nations which have not attacked ones' own nation are prohibited under international law. Wars of aggression were declared illegal at the Nuremberg trials after World War II, which established the invasion of other nations by Germany as the type-case.

Subsequently, the United Nations General Assembly has enacted resolutions prohibiting military aggression, invasions, and occupations of one country by another - except in self-defence when the target nation had attacked first.

Iran , at this point, is only known to be developing nuclear power plants and materials. And it has never attacked the U.S. Yet Iran is being subjected to sanctions, calls for more sanctions, and threats of possible military aggression against them.

The Truth About the Non-Proliferation Treaty

As a signatory of the U.N. Nuclear non-proliferation treaty, Iran must not develop nuclear weapons.

However - and this is a crucial point - the non-proliferation treaty gives every signatory the sovereign right to voluntarily withdraw from the treaty on three months notice. After doing so, that country has the absolute right under international law to develop nuclear weapons on its own territory.

Instead of acknowledging these realities, western politicians and media have systematically concealed them from the public. In place of the truth they have repeated vague mantras like 'defying the international community' (i.e., not bending to the will of the U.S.).

In a typical example of this deceptive rhetoric, U.S. President Obama said a few days ago: "Despite the posturing that its nuclear power is only for civilian use ... they in fact continue to pursue a course that would lead to weaponization, and that is not acceptable to the international community."

The absence of any legal argument in this statement reflects the fact that there is no legal argument against Iran's nuclear energy program, and that even development of weapons would be legal if Iraq withdraws from the Nuclear Non-Proliferation treaty. Of course, Obama invoking the 'non-acceptance by the 'international community' does not mean the nations of the world; it's code for 'the U.S. and its allies'.

U.S. Sanctions are part of Imperialism

To fully understand U.S. policy towards Iran and North Korea, we need to situate it in the wider attempt to extend its military machine across the world, and to remove any obstacles to its dominance.

There are currently 700 U.S. military bases outside the U.S., and it is engaged in a vast project to extend the reach of Nato by incorporating as many as possible of the former East European socialist states and former parts of the Soviet Union.

The U.S. is also seeking to militarily encircle both Russia and China with sea-based missile carrying ships, bases in neighboring states, hi-tech weapons on Taiwan, and the arming of small client anti-Russian states like Georgia. U.S. bases are also being built in the South American country of Columbia, right next door to Venezuela, a country which has sought to develop a socialist alternative to U.S. domination of the region.

U.S. opposition to Iran's nuclear program is intended to help ensure that the U.S. - and its nuclear armed major allies such as Britain, France, India, and Pakistan - can continue to dominate the world. It is also intended to weaken the ability of middle eastern countries to resist U.S. domination in their region.