The American media is already declaring Ukrainian "democracy" dead. Why? Because the people have decided they have had enough of that "democracy": of the infighting of the Western puppets and thieves, installed with massive US/EU funds, destruction of the economy, and slaving to the NATO/US/EU complex. Those people dared to voice their opinion putting Victor Yanukovich in first place in the initial elections and giving him a projected 15% lead over the fascist puppet of the West: Yulia Tymoshenko. 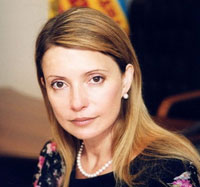 The Neocon voice of the Wall Street Journal declared that "Ukraine Needs the West's Support"! I believe after 6 years of that support, Ukraine is more than ready to show the West the finger and already has. Not that their opinion matters. After all, the Wall Street Journal has declared that by making this vote, Ukrainians have turned away from Freedom...after all, the West is the author of freedom, as long as you choose one of the offered parties and do what you are told.

"This is a minor miracle. Twenty years after the fall of the Berlin Wall, a new divide sunders Europe. On one side are free nations safely behind the walls of the West's elite clubs, the European Union and NATO, or about to hop over. To the east, from Belarus to the Caucasus and Central Asia, stretches an authoritarian wilderness." Declares the WSJ. Ahh, yes, if we are not a war mongering, absolutely corrupt "democracy" which cares more about Third Worlders than its own citizens, while stealing trillions of its people's present and future monies to give to the top .1%, than we are barbarians living in the wilderness.

"It remains strategically critical. A stable, prosperous and free Ukraine ensures Russia can't rebuild its regional empire; it'd also be a teachable counterexample to the deadening hand of Putinism for their Slavic cousins up north. The press is free and diverse and political parties vibrant. At all times of the year, protestors hurl abuse at their ministers or parliamentarians along Kiev's central Hrushevsky Street. Try to find such scenes on Red Square. Russian oligarchic elites who handpick their leaders hate the Ukrainian, and across the Black Sea the Georgian, experiments with free elections for good reason."

Besides stating so well that the US drive is purely anti-Russian, thank you WSJ for admitting the truth that you and those you support are our absolute enemies. As for the rest, lets see, in the US there is One Party with Two Branches that crushes any other party and a mass media owned by the owners of that One Party that does everything to destroy any politician who is not bought and paid for. In England, there is little difference either between Labour, New Labour and the so called Menshevik Tories. In Russia we have a lot more viable parties and a vote turn out of over 70%, well over 3 times of the average US election.

As for demonstrations, the scenes of US police beating protesters and tear gassing them in Seattle, Washington and other places says everything that needs to be said about the so called "Free" West. And the "free" elections in Georgia is even better, where the dictator holds over 90% of the parliment and regularly beats and tear gasses his opposition, while arresting and murdering their leadership...but he is a New York lawyer, so what is one to expect?

This while the US/EU out going puppet declares Bondera, a Nazi puppet and mass murderer of Jews, Russians, Poles and others, as a national hero.

Now the upcoming loser and still Western glamour girl, who is about to be trolloped royally, has declared that Yanukovich, who is clearly leading to win, is preparing to seize power by force. Now, madame allied to the Nazis, such as American funded Una-Unso, why would he need that? Besides, with her billions of stolen gas money, she does not need to work, but power still calls.

To that end, this "hero" of the people, who feels their pain, while counting the billions she stole in gas that was supposed to warm them, is prepared to do anything she can and so well stated in an AFP hit piece ("Ukraine's Tymoshenko accuses rival") "As in 2004, we are going to put (Yanukovich) in his place in a severe manner and he will never get power in Ukraine, whatever the circumstances," said Tymoshenko, who was one of the leaders of the Orange Revolution." God forbid, anyone actually checks up on these accusations. After all, Tymoshenko sent her goons to remove the director of a printing company which is printing the ballots for the 2nd round. Only swift action by the Supreme Court and the Rada (parliament) forced her to back down before they could print "pre-marked" ballots.

So, we can look forward to the West trying an out and out revolution, except this one will be brown, as are the true colours of this Nazi and her fascist Marxist backers in the West and will be high lighted in red, the blood of thousands of dead civilians who will suffer once more for the West's insatiable greed for our Russian (and yes Ukraine is the heart of Rus) lands and souls.