Is Obama an American Gorbachev? 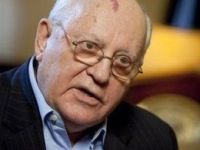 Is Obama an American Gorbachev?

"The election of Obama was not an accident," Gorbachev said. "It is true however that there has been some slippage in support for him." While he said that he liked Obama "a great deal," Gorbachev acknowledged that Obama faces considerable difficulties as he attempts to change his country's policies.

"US policy is changing, but it's a difficult process," he said. Gorbachev feels that the United States had missed "many opportunities" in the past, but chances are better with Obama. "I am very pleased that now Obama has changed course and has gone back to dialogue and the process of nuclear arms control," said Gorbachev, speaking through an interpreter.

Some have said they see Barack Obama as the US version of Mikhail Gorbachev. When the United States found itself in the midst of a global economic crisis, the administration decided it was time to launch the dialogue and discussion idea for peace in the world spoken about in the campaign. This is what Mikhail Gorbachev attempted to do during his leadership of the Soviet Union. During his trip to Moscow, Obama met with Mikhail Gorbachev.

The United States is suffering from a worst case of "buyer's remorse" since the fall of Nazi Germany. President Obama under the circumstances can only really work for change in the health care system, which is a life-and-death matter. The sordid rackets so ostentatiously infecting the system boil down vividly to lives ruined and bankrupted, and a system more frightful to deal with than disease itself. Probably the home truth is that health care will end up being rationed one way or another due to the change in the Democratic Congress.

Economically, the US isn't in a recession it's in a collapse. Dmitry Orlov outlined the process in his book "Reinventing Collapse" about the parallels between the dissolution of the Soviet Union and the prospects for demise of the US as currently constituted.

Mikhail Gorbachev presided over the Soviet dissolution. In the USA, the outcome this time might not be very appetizing. It would be one of the supreme ironies of history if it turned out that the US was incapable of ending its most self-destructive rackets peacefully and bloodlessly, while Russia made her transition in a peaceful, orderly manner.

Time will tell. Until then, Russia has proven once again she is a reliable, stable and responsible partner in international relations, has tremendous respect in the international community due to the fact that she honours international law and the agreements she signs and provides a remarkable opportunity for investors, showing signs of increasing strength in the fundamentals which underpin the economy.