Charlie Simpson of London planned to enjoy a bicycle ride in the local park with his father. Instead, the seven-year-old made a five-mile trip that has raised money for children affected by the earthquake in Haiti. Gordon Brown said that Charlie Simpson, from west London, was a "shining example" of Britain's compassion for Haiti. 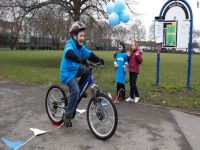 Unable to meet with the boy himself, Mr. Brown sent his wife, Sarah, to meet Charlie instead. Mr. Brown issued a statement commending Charlie's work. He said: "Charlie's dedication in raising money for the victims of the Haiti earthquake is truly inspirational and a shining example of the kind of friendship, goodness and compassion so often shown by British people."

Charlie decided to raise funds for UNICEF’s response to the disaster by riding around his local park seven times last Sunday. His goal was to collect £500 in sponsorship pledges through a website, but as of today he has exceeded his goal by raising nearly £170,000 and counting.

The young man has a website where he wrote his thoughts: “I want to do a sponsored bike ride for Haiti because there was a big earthquake and loads of people have lost their lives. I want to make some money to buy food, water and tents for everyone in Haiti.”

Before the earthquake, Haiti was already the Western Hemisphere’s poorest nation. Even then, only 50 percent of the impoverished population had access to clean water.

Charlie’s efforts to help children an ocean away have captured the public imagination and spurred donations from places such as Hong Kong and New Zealand.

“He really felt strongly about this and thought that something had to be done,” said his smiling, proud mother, Leonora Simpson. “It was great to see him so motivated. I am extremely proud of our Charlie.”

Below is Charlie’s website where he has been collecting donations for Haiti.

Meanwhile, desperate for money, some Haitians have sunk to offering Haitian orphans for sale to Western assistance workers for as little as $50. Up to one million children are believed to be at risk with these desperate adults. One Canadian minister who rescues orphans claimed a man, while in refugee camp, attempted to sell him a child for $50. According to reports, some men have been lynched after they were accused of trying to steal infants to sell.