While America Drowns, Obama and the Elites Party

There is, yet again, something very Romanesque about the state of the Americans, their empire and their collapse. As the US continues to sink in its co-UK created economic armageddon, the ruling regime enjoys the fruits of its labour of looting and swindling. This is the great "Democracy" they sell us, overseas. 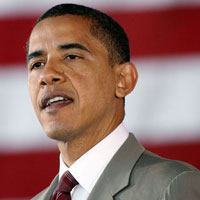 While America Drowns, Obama and the Elites Party

As the year ended, America suffered one of its worst months for employment. Sure, reading the official Ministry of Propaganda (so called free press) reports showed only a mere another 85,000 Americans as loosing jobs, or rather the work force shrinking by that amount, so it takes the UK Telegraph (America slides deeper into depression as Wall Street revels ) to report the real situation, that 650,000 unemployed were moved into a category named "No Longer Searching For Jobs". This is how the American regimes "honestly" tell the population that the unemployment rate is not going up and the lie they tell the rest of us, fortunate not to live under this deceit. This is the category that DC uses to dump the unwanted, unneeded and unemployable waste, its workers who no longer get government unemployment help and can go starve for all the elites care. After all, judging by the head lines out of DC, for the Haitians there is money, for their own unemployed, shelters and bread lines. This category has been growing by nearly half a million every month for the last year.

The hits kept on coming, too, for the former partiers of the American economic "miracle" of debt. Like a crippled Hercules, trying to lift a mountain of debt, or rather trying to keep it above their heads and from crushing them, the American populace continues to strain and tire and suffer, even as they deny reality while their legs sink deeper under their burden.

News came that inflation was really low in 2009, under 2%. Of course, the fact that salaries sank was not counted into that "fixed" model of inflation, otherwise the picture would not be so pretty. Outsourcing of jobs also accelerated, with predictions that up to 20% of the remaining jobs would still be outsourced, within the next few years. All hail the Marxist Free Trade. At the same time, news arrived that 1.4 million Americans went into bankruptcy last year, over a 30% jump from 2008. Food Stamps use, a form of government subsidy for food, was being given to over 10% of the population, with one third of the country's children living in the abject poverty it takes to qualify for the handout.

At the same time, a massive new wave of mortgage defaults in the resettling of exotic mortgages, continued loss of jobs and thus regular mortgages and a collapsing business/commercial real-estate market is just starting to break over the Americans and promises to be worse than the first wave.

To all this, the American military has increased its budget by some $100 BILLION from 2009's already mammoth $600 BILLION budget, more than every nation combined. And the people are continued to be led down the trail of slavery by their noses, in fear of being "invaded" or "attacked" while their sons sit in some 100 nations around the world, enforcing the Empire. Yet despite this giant spend on the military, families of US soldiers continue to have to buy body armour and other equipments and send them to their sons, since there are no funds for that armour and equipments, not after the elites and their companies get done pilfering the giant sum. Remember too, this does not include another $40 or so BILLION for the wars!

Equally, the evils of Wall Street, the pack of hyenas, the cabal of witches who brought us the lovely Soviet Revolution, the Great Depression, the Nazi take over, the rape of post Soviet Russia, the Asian Flu, (The Six Evils of Wall Street and the Suffering of Humanity ) are now paying themselves $146 BILLION in bonuses, 8% more than the 2007 record, after stealing $700 BILLION from the American tax serfs, through bought and paid for farce of their so called "Democracy". That is some 20,000 people will be splitting $146 BILLION, or an average of $7.3 million each, for the people who are still laughing at all the Luciferien death and misery they caused by starting the lovely Great Depression II.

But best of all, it has now been brought out that the Obama Regime, much like Nero or Caligula, has been partying hard, with over 170 parties, receptions and big dinners, entertaining over 50,000 guests, flying in specialty chefs from around the world, all in this one year of power. That is, one party every two days. And the American serfs? They just bare it, grumble and pay their taxes, it si what they have been trained for. Oh sure, a bunch will get together here and there and wave signs and scream slogans for a few hours and then go home, feeling good that they did "something" and pat themselves on the backs for their "accomplishments" while promising to vote out the present elites and replace them with an exact same set from a different branch of the One Party Two Branch system. Someone famously called this: rearranging the deck chairs on the Titanic. And their so called conservative leaders on TV will tell them what great deeds they have done and how great they are, even as nothing changes and these so called leaders hustle books and t-shirts and caps to the impoverished but good feeling tax serfs. In other words, the bleeding continues.