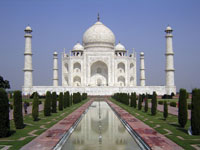 The ancient Egyptians in their writings described that they had come "from the South", and from a land which was reached by crossing the Great Sea, a land which they called "Punt". Some have said "Punt" refers to ancient Somalia but this cannot be for various reasons, among them being the fact that the description of the animals and plants given by the ancient Egyptians as being native to the land of Punt match only with that of the southwestern coast of India (known as Malabar). Also, Somalia doesn't lie across any great sea. There is, in fact, considerable archaeological and anthropological evidence that ancient India was the source of ancient Egyptian civilization. The ancient black Indians, known as "Dravidians", (who in ancient times were also known by the Greeks and Egyptians as "Ethiopians") built and laid out ancient Egyptian civilization and, no doubt, in the process also mixed with their black brethren in Africa. The ancient Egyptians, themselves, admitted in their writings that they received their civilization and culture from the Ethiopians, another black "race".

In ancient times there were known to be two types of Ethiopians, Western Ethiopians, in Africa, (who were black with woolly hair and fine features) and their brethren, the Eastern Ethiopians, of India, who also were black with fine features but possessed straight hair. Both Western and Eastern Ethiopians were descended from the biblical Cush, one of the sons of Ham. An excellent website offering substantial scholarship and historical documentation and evidence that ancient India was the source of Egypt's ancient culture and civilization is "India and Egypt".

Before the Aryans (a Caucasian race who were nomadic) invaded India, India was composed mainly of various black "races" (the Dravidians, the Veddoids, also known as Australoids, and the Negrito proples) The pre-Aryan people had built the ancient Indus Valley civilization, one of the world's four earliest cradles of civilization. Today, the majority of India's population is a mixture of both Aryan and Dravidian with pure Aryans mainly in the extreme North and pure Dravidians mainly in the extreme South. The Veddoids mainly live in the hill regions of India and the Negritos mainly live off coast in the Andaman and Nicobar islands.

India contributed tremendously to Western civilization. Many don't realize that Western mathematics originated in India. The so-called "Arabic" numerals were borrowed by the Arabs from the Indians. Because the Europeans borrowed their mathematics from the Arabs they became known as Arabic numerals, but they originated in India. Without the decimal system that India created and which was borrowed by the West, via the Arabs, Western science and technology would not have been possible. The ancient Roman numerals would not have sufficed. The Arabs borrowed much of their sciences and mathematics from India and transmitted them to the West. More and more textbooks on mathematics now are mentioning India as the original source of Western mathematics.

Today Egypt is referred to as an Arab nation, but this is only because the Arabs conquered Egypt centuries ago and imposed upon the original people their Arab language, culture and Moslem religion. Many modern Egyptians of today are really the descendants of Arab, Persian, Greek, and other non-African peoples that entered into Egypt over the many centuries. The ancient or original Egyptians, however, were of African or Black (Negroid) descent, and this is still mostly true of the bulk of Egypt's rural population, especially in the south. Long before the Arabs invaded and conquered Egypt the famous and ancient Greek historian Herodotus (who is known as the Father of History) visited Egypt and wrote concerning the Egyptians: "They have burnt skin, flat noses, thick lips, and wooly hair" (Herodotus, Book II, p. 100, translated by George Rawlinson, New York: Tudor, 1928). Readers may wish to obtain the book "Return To Glory". The book, written by white author and professional speaker Joel F. Freeman, discusses the historical and archaeological evidences for ancient black Egyptian civilization.

Contrary to popular belief by some, black skin is not a curse. Ham (which means "black") was given that name by his father Noah before there was any curse pronounced by Noah. Furthermore, Noah had never cursed Ham himself but, rather, Ham's son Canaan. And even that curse wasn't eternal or perpetual because the Bible tells us that a curse lasts for only a few generations. A more comprehensive treatment of this subject may be found in my article "Negro Slavery and The Myth of Ham's Curse".

Black skin protects from the harmful effects of ultraviolet light. In fact, all human skin color is brown. The skin pigment that gives color to all skin is melanin which is brown. Whites have the least amount of melanin in their skin and that's why they appear "white". Only albinos (those born with no melanin because of genetic defect and mutation) are purely white and in most danger from harmful effects of the Sun's rays. Instead of black skin being a "curse" it is a healthful blessing for those living in year round hot climates.

We are all from the same parents, created equally in God's image, and in Christ equally His children and whatever we possess and whatever good and progress any in the human race have done or accomplished is by the Creator's undeserving free grace, for His rightful glory and for our benefit and the benefit of others.

The author, Babu G. Ranganathan, has his bachelor's degree with concentrations in theology and biology and has been recognized for his writings on religion and science in the 24th edition of Marquis "Who's Who In The East". The author's writings may be accessed at www.religionscience.com