In capitalist society, according to Marx, life becomes a means of living in that people live not just for the sake of it but they live “for" something. I don't work because I like to answer the phone, do radio programs or write, but rather because by doing this, I earn money which enables me to do what I want. Money, the universal means, is right in the middle of all of this. 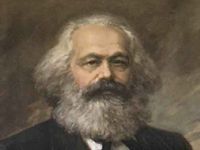 What happens with money in daily life, in the life of relation, takes place with logic, "the money of the spirit" in his words." Private property has made us so foolish and stupid, he states that a thing is only ours when we directly possess it, to eat, drink, wear, use or inhabit." That is, when we use it. (Economic and Philosophical Manuscripts of 1844. Manuscript III: Money). "All the physical and spiritual senses were reduced to only the sense to have." (...) "Man had to be reduced to this abject poverty, giving birth to all his inner wealth."

These words of Marx on the human being in capitalist society, lead us to reflect on life itself and life as a medium. I'm surprised, a child is surprised, at life itself, it fascinates me, I wonder, wonder, and do not get tired to be surprised by the mere fact of being alive, to be breathing, to be living in a body, and that body walks, hears, sees, thinks, feels, wants, fights, cries and laughs.

As I have already lived a number of years, a considerable wonder, as all people who already have a certain age, the fact of having gone through many experiences, from childhood to today, when the final season foresees much more next.

So many people and places, so many roads and books, so many speeches and so many battles, so much fear and courage, so much of everything to get here to this page where you are there and here we have a dialogue in silence.

Marx's writings on human beings in capitalist society are a warning against the loss felt by the commercialization of life, by the utilitarianism, by media coverage. The life that becomes a means of living is lost in terms of quality of life.

Marx was recalled, in his humanitarian issues, humanizing and humanized by Agnes Heller, Wilhelm Reich, Max Weber, Erich Fromm, among others, and others. In his tomb in the cemetery in Southampton, England, these words can be read: "I am a man, and nothing human is alien to me."