Poland is Cruising for a Bruising; US Eating Its Own Vomit

The Polish Defense Ministry announced that a base with up to eight launch pads manned by some 100 U.S. troops will be installed in Warminsko-Mazurskie Province close to Morag, 37 miles (60 kilometers) from the Poland-Kaliningrad border. This is a worse option than when first announced, the claim then was that it would be placed 100 kilometers from the border with Russia. 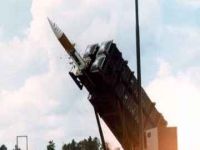 Poland is Cruising for a Bruising; US Eating Its Own Vomit

"In Morag we could offer the best conditions for American soldiers and the best technical base for the equipment," said Polish Radio.

Poland says the missiles, to be installed in April, will be used to "train" the military. Train the military to do what remains unclear. According to the SOFA, U.S. troops will service Patriot missiles that are to be integrated into Poland's national security system.

Poland and the United States signed a Status of Forces Agreement (SOFA) last December laying out the conditions for the deployment of U.S. troops on Polish soil. The plan was originally intended as a reward for Poland's acceptance of a US missile defence base, but Obama has not yet decided the fate of the proposed missile defence system. Although information has been mostly unavailable about the new system, it is believed to entail the deployment of US cruisers and destroyers equipped with sophisticated Aegis radars and antimissile interceptors in the eastern Mediterranean and North Sea.

Why the program continues with the missile defence system shelved from its Polish location is obvious: it was never meant to be a defensive system. It will be an offensive system. It had nothing to do with Iran and everything to do with Russia. It was about puffing up a country that has no intention of getting along with its neighbors, stirring things up and patching up a wounded ego.

Russian Foreign Minister Sergei Lavrov said he cannot comprehend the need "to create the impression as if Poland is bracing itself against Russia." This new development has not seen official Russian government comment beyond Mr. Lavrov.

Back in the US, there is still massive wasteful spending on overseas wars and adventurism while the US population has once again sunk into a mire of stupification. It seems the Obama phenomenon was only a brief shooting star whose light is now extinguished. The power broker elites have reasserted themselves.

Again, the country has slipped back into night and darkness as the awakening from their slumber is now obviously seen as having been only temporary. The failure to elect a Democrat to Senator Ted Kennedy’s seat seems to have assured that the enemies of all of Obama’s initiatives will now be able to sufficiently block his efforts in every sphere.

The US population, it seems, is now prepared to ingest their own vomit. They lost their memory of the disastrous Bush administration very quickly and have succumbed to the empty deceitful rhetoric of the elites again, generated largely by desperate insurance companies and corporate interests who envision that the last thing the country’s resources will be spent on is for the welfare of its own people. Heaven forbid a touch of human “socialism” makes the lives of American citizens healthier or more secure. That is not allowed.

Additionally, the latest airline “terrorist incident” has made them even more willing to accept additional measures that violate privacy and human rights. These include racial or ethnic profiling, the setting up of privacy-invading databases and the introduction of new technologies, such as body scanners, without proper assessment of their possible ramifications on human rights.

Another indication that nothing has changed is that the utter failure, George Bush, who bungled Hurricane Katrina in the worst possible fashion, is now fund raising for Haiti.

Why is the US placing men and materials so close to the border of Russia? Throw away that reset button. It was all a sham and a farce. A match needs to be placed on everything to do with START, which won’t be worth the paper it gets written on. Absolutely everything in every realm with the US needs to start from scratch.

"The appearance of American soldiers in Russia’s vicinity will be a nail in a coffin in US-Russia relations,' said military analyst Pavel Felgengauer." Indeed it will be.

Meanwhile, the Russian daily Viedomosti has written that Russia is going to pursue its initial plan to install the Iskander missile system in Kaliningrad, the Russian land corridor near the Polish border. Moscow withdrew that plan when the US backed down from installing the anti-missile system in Poland and the Czech Republic.

Whatever the plans were for the Iskander missile system, they should be doubled now. The hostile intentions of the west, the US and Poland are so thick, they can be cut a knife.

So Poland is asking for trouble. Unfortunately, Poland is likely to find it, along with their American enablers.