Is Afghanistan Worth it?

Why should the international community be spending two hundred and fifty billion dollars of its taxpayers’ hard-earned money to perform state-building in Afghanistan when this country now produces 40 times more heroin than ten years ago and when corruption accounts for 2.5 billion dollars a year for NATO-trained officials to get rich? 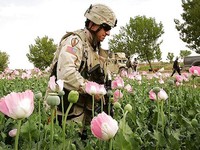 Is Afghanistan Worth it?

A recent UN report, “Corruption in Afghanistan: Bribery as Reported by Victims” issued by the UNODC (United Nations Office on Drugs and Crime) reveals that for the vast majority of the citizens of Afghanistan, the worst problem is corruption and not insecurity, despite the fact that this is becoming worse by the day. The report was based upon a survey involving 7,600 people in 12 provincial capitals and 1,600 villages.

In the last year, Afghanistan’s citizens paid 2.5 billion dollars in bribes to the authorities to secure basic services which were supposed to be a right. Antonio Maria Costa, Executive Director of UNODC, states in the report “The Afghans say that it is impossible to obtain a public service without paying a bribe”. It revealed that 50% of Afghans had to pay some sort of bribe in the period in question.

The report reveals that in most cases the bribe was requested explicitly by the service provider and was paid in cash. In a country where the per capita GDP is 425 USD per annum, the average bribe is 160 USD, or 40% of the average national per capita GDP. In the USA, this would be equivalent to 19,000 USD.

So is Afghanistan really worth it? According to UN figures, corruption accounts for nearly as much money as the opium trade, 2.5 billion USD as compared with 2.8 bn. Heroin production has risen by 40 times over the last decade and last year is estimated to have accounted for 90,000 deaths worldwide.

Is Afghanistan really worth the 250,000,000,000 spent so far in stabilising the country and training public officials, when 25 per cent of Afghans state they have had to pay a bribe to police and local authorities and up to 20% more had to bribe a government official or senior member of the judicial system?

Is it really worth spending hundreds of billions of dollars and risking soldiers’ lives when the bulk of the terrorists have fled over the border into Pakistan and when the very presence of foreign soldiers is a call to loyal Afghans to defend their territory, as they have been doing for hundreds of years?

Is it really worth the effort when over half the Afghans covered in the survey stated that the aid workers in NGOs present in the country are corrupt and are only involved so as to get rich?

Almost ten years after NATO invaded Afghanistan, the security situation is worse, heroin production has skyrocketed and presents a threat to the international community 40 times higher than before the campaign, and for what? For thousands of family members across the NATO member states to mourn their loved ones, for the taxpayers of NATO countries to foot the 250 thousand million dollar bill (to date) – where did people think the money came from? – and for a handful of officials to get rich at the cost of the people who are in an even worse plight than before.

True, international terrorism is an evil and a scourge that must be fought and beaten. Yet while so much money and so many resources are concentrated in Afghanistan, the Al Qaeda controllers are operating elsewhere.

We are dealing with cowards who are afraid to fight and who use the mentally diminished to carry out their work through suicide bombings. If things start getting tough they are not going to stay in Afghanistan.

It is not called propping up a corrupt motley group of gangsters and criminals which was always on the fringes of Afghan society. The bottom line is, if you are going to interfere in a foreign country, get it right from the word go, or be involved in a never-ending nightmare which sucks your resources, your will and your people dry. The alternative is a hands-on policy of development through a carefully structured and monitored aid programme, backed up if necessary by discreet military presence and intelligence.