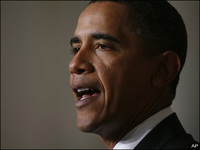 The world needs a strong Barack Obama as President of the United States of America, just as the world needs strong and resolute governments in the most powerful nations, which can make a difference against the forces of evil which stubbornly plot against the happiness of ordinary families going about their daily lives: the Islamist fanatics who believe that through murdering innocent people they have a cause.

The world needs a strong Barack Obama because he is the right man in the right place at the right time. After eight years of knee-jerk reactions from the Bush regime, which followed the Serbophobic Clinton regime that unforgivably created the Kosovo question, it is time for someone who understands the issues and more than that, who has the human qualities to listen and to dialogue, debate and discuss. These are the fundamentals of democracy, not illegal wars, not doling out contracts to White House cronies without tender, not lies and skulduggery.

The world needs a strong Barack Obama because the world needs the United States of America onboard and engaged, the world needs a country with the USA’s natural and human resources standing up for common values of decency, standing up for what is regarded as right by the vast majority of balanced and sane individuals in the four corners of the world and standing up against the monstrosity of Islamist terrorism, as indeed Russia does and has done since the end of the 1970s when she went to fight this scourge in Afghanistan.

And the world needs a strong Barack Obama because he is an excellent advocate for his people, the antithesis of the “stupid American” stereotype which is bandied around by the feeble minded but which does not exist – try entering a University in the USA and then call them stupid! He is articulate, intelligent and focused, he knows the world outside the USA and there is an aura of decency about the man which makes him likeable.

In his dealings with the Russian Federation, he got off to an excellent start with the Reset Summit, discovering that Russia never had so many problems with the USA as the USA had with Russia. Since then, the two Governments have been working together in a professional and workmanlike manner, proof that they are two partners on the same team and facing the same common enemy: Islamist fanaticism.

This does not mean that Islam is an evil religion any more than it justifies Islamophobia, because 99.9% of Moslems abhor violence and deride the Jihadis as the murderers and fanatics they are. Too cowardly to carry out the attacks themselves, they use feeble-minded young men, brainwash them and send them to blow themselves up. Neither does it mean that it is acceptable for people to take swipes at the USA and Americans just because they are Americans or it is the USA, for doing so is paramount to racism, which is based on ignorance, stupidity and plain evil.

Therefore those who try to attack Barack Obama by making false accusations, as is the case with the Stephen Lendman article “Haitians in America Denied Temporary protected Status” lend no credence whatsoever to the notion that they are intelligent and therefore worthy opinion makers. The Haitians in America have not been denied Temporary Protected Status: the Obama Administration stated on Friday that it will indeed grant TPS to Haitians in the USA.

Janet Napolitano, US Secretary of Homeland Security , declared as follows: “As part of the Department's ongoing efforts to assist Haiti following Tuesday's devastating earthquake, I am announcing the designation of Temporary Protected Status (TPS) for Haitian nationals who were in the United States as of January 12, 2010.

“This is a disaster of historic proportions and this designation will allow eligible Haitian nationals in the United States to continue living and working in our country for the next 18 months.”