“Please help us, so that others don’t have to pass through this”

The words of a 15-year-old girl, forced to become a child soldier, forced to shoot dead another child, given a month’s military training and then sent into battle against hardened government troops in Uganda. However, the countries using child soldiers include Israel, the United Kingdom and the USA. 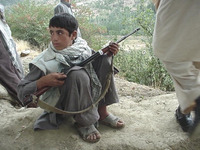 “Please help us, so that others don’t have to pass through this”

The 15-year-old girl quoted above who was forced to become a child soldier in Uganda was forced to fight Government troops after just 35 days’ training, was shot at because she dropped a water container, was forced to shoot dead another child who was trying to escape and saw another comrade literally hacked to death.

Children as young as nine years of age are kidnapped, forced or coerced into combat, used as sex slaves or else to do mine laying, often treated with brutality, denied healthcare. However this is not just an African phenomenon: children are used in conflict in Asia and Latin America, by the Israeli Defence Force, by the armed forces of the UK, Australia, New Zealand and the USA, these countries claiming they cannot raise the age of conscription to 18 due to manpower shortages.

Tens of thousands of children are still actively engaged in armed conflicts across the globe although many other tens of thousands have been released in recent years in part due to the activities of Child Soldiers Global Report and are subsequently involved in DDR programs (Demobilization, Disarmament and Reintegration).

The British Armed Forces deployed under-18s to the combat theatre in Iraq (2003/5) (but removed most of these from the active combat zone after a week) and the Israeli defence forces used Palestinian children as human shields on numerous occasions. Ill-treatment and torture were common practice on children held under military provisions by the IDF according to Child Soldiers Global Report.

Children were recruited and used as auxiliary forces in a further 4 countries: Iran (Asia). Libya and Zimbabwe (Africa) and Peru (Latin America).

While trillions of dollars were found to bail out the banks, while a trillion dollars have been spent on wars in Iraq and Afghanistan, there is not enough money for the international community to put into development programs?