What makes the son of a successful Nigerian businessman set fire to his groin in an aircraft full of passengers? What makes the authorities allow someone who was on a list of suspects to board a passenger aircraft in the first place? And what exactly do these young men hope to achieve? 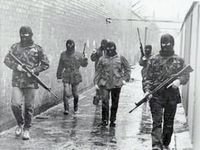 Instead he chose the path of terrorism. True, its marketing impact is tremendous. True, 9/11 put Usama bin Laden on the map. And true, a nobody can become a somebody if he is given a cause to fight for. It depends on the cause.

And here is where I address you, Al Qaeda, its leaders and all those young men and women who want to feel special by committing outrages against fellow human beings. International journalism gave me a name and PRAVDA.Ru gave me a voice, which is only after all what you are seeking for.

You sell your souls to those who use mentally retarded individuals as suicide bombers, you sell your souls and your lives and your futures to unscrupulous cowards who make a comfortable living at the expense of others, including the lives of women, children and babies.

Is it heroic to destroy yourself, along with a few dozens of civilians? (These days the casualties are more and more reduced). Is it heroic to blow yourself up on an aircraft? Or to burn your groin because your “handlers” were so inept that they gave you PETN, which is practically impossible to detonate without a charge?

Do you believe you have a heroic cause when the majority of Al Qaeda attacks are sugar-and-weedkiller type rudimentary devices which more often than not cause severe burns to the idiot who was stupid enough to be talked in to killing himself and not the supposed victims?

Do you believe you create anything more than slight annoyance among airline passengers? Annoyance we have our hand luggage restricted, annoyance at yet more delays and annoyance that we cannot use the toilets when we want. Nothing more than that. People used aircraft before 9/11 and they have continued to use them in increasing numbers since then.

We, the thinking members of the international community, do not hate you, we do not despise you. We feel sorry for you because you are the victims, you are the ones whose lives and futures are being stolen away from you by those who sell you a warped and wrong image of Islam and use you to do the deeds they themselves are too cowardly to perform.

Rather than turn your hatred against sweeping generalist notions such as “the Westerners”, turn it against those who by using you insult your families, insult your mothers and insult Islam itself. Tell them to do it, as if they had the courage. But they will not because they want you do perform the outrage. Why? Because they are snivelling cowards, because they make millions out of trafficking guns and drugs and because they want to take away your life and future and gain reputations and fortunes through your family’s loss.

And secondly if you really want to go and meet your seventy virgins, which I assure you do not exist (if you were real men you’d have them here on Earth and even if they did, how would you be in a state to do anything with them if you blow yourself up?), then go to a deserted area, strap the explosives to yourself, activate the detonator and get it over with.

The people you aim to hurt are decent, nice people. They have their families, their children and their loved ones. They like to laugh, they like to smile. And they would probably love you if they knew you. Those cowards who send you to your death do not and never will. They take away your lives on Earth and sell your soul to the Devil. You disappear. They stay. And they laugh at your stupidity and weakness.