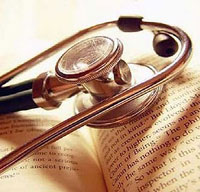 Dr. Benjamin Rush, a signer of the Declaration of Independence, is quoted as warning two centuries ago:

That time seems to have come, but the dictatorship we are facing is not the sort that Dr. Rush was apparently envisioning. It is not a dictatorship by medical doctors, who are as distressed by the proposed legislation as the squeezed middle class is. (For a withering analysis by an outraged M.D. of the nearly 2000 - page House bill, see here.) The new dictatorship is not by doctors but by Wall Street -- the FIRE (finance, insurance, and real estate) sector that now claims 40% of corporate profits.

Economist L. Randall Wray observes that ever since Congress threw out the Glass-Steagall Act separating commercial banking from investment banking, insurance and Wall Street finance have been “two peas in a pod.” He writes:

“[T] here is a huge untapped market of some 50 million people who are not paying insurance premiums—and the number grows every year because employers drop coverage and people can’t afford premiums. Solution? Health insurance ‘reform’ that requires everyone to turn over their pay to Wall Street. . . . This is just another bailout of the financial system, because the tens of trillions of dollars already committed are not nearly enough.”

The health reform bills now coming through Congress are not focused on how to make health care cheaper or more effective, how to eliminate waste and fraud, or how to cut out expensive middlemen. As originally envisioned, the public option would have pursued those goals. But the public option has been dropped from the Senate bill and radically watered down in the House bill.

Rather than focusing on making health care affordable, the bills focus on how to force people either to buy health insurance if they don’t have it, or to pay more for it if they do. If you don’t have insurance and don’t purchase it, you will be subject to a hefty fine. And if you do purchase it, premiums, co-pays, co-insurance payments and deductibles are liable to keep health care cripplingly expensive. Most of the people who don't have health care can't afford to pay the deductibles, so they will never use the plans they are forced to buy.

To subsidize those who can’t pay, the Senate bill would make families earning two to four times the poverty level who don’t have employer-sponsored insurance surrender 8% to 12% of their income to insurance payments, or pay a fine. In another effort to make the insurance payments “affordable,” the Senate bill calls for the lowest cost plan to cover only sixty percent of health care costs.

“Inother words,” writes Dr. Andrew Coates in a November 23 article, “a guarantee of insurance industry dominance and the continued privatization of health care in every arena.”

Compulsory health insurance is like compulsory selective military service (the draft), except that all of our numbers have come up. The argument has been made that auto insurance is compulsory, so why not health insurance? But the obvious response is that you can choose to drive a car. The only way to escape the vehicle we call a body is to give up the ghost.

The Right to Sovereignty Over Our Own Bodies

The conventional treatment promoted by the medical/pharmaceutical complex is an aggressive approach that can wind up killing the patient as collateral damage in its war on the disease. Among other researchers questioning the wisdom of this approach is Gary Null, who reported the results of an exhaustive independent review by the Nutrition Institute of America in 2004. The reviewers concluded that the number one killer is not heart disease or cancer but conventional medicine itself. Conventional medicine was found to be responsible for an estimated 783,936 deaths annually, including 106,000 deaths from adverse drug reactions, 98,000 from medical errors, and 88,000 from infection; and those figures were conservative, since no more than 20 percent of iatrogenic (doctor- or drug-caused) mishaps are ever reported.

There are more natural, less invasive alternatives, but most are not covered by insurance; and even such simple remedies as healthy organic food may be too expensive for people forced to use a major portion of their incomes for medical insurance. A true public option of the Medicare-for-all variety could have solved the problem by keeping health care affordable. If other industrialized countries can find the money for a national health service, we could too. For a model, we could follow the lead of Canada, which originally obtained the funds for its national health service from its own publicly-owned central bank. But that will be the subject of another article. Stay tuned.

Ellen Brown is an attorney and the author of 11 books, including Forbidden Medicine, The Key to Ultimate Health (co-authored with Dr. Richard Hansen), Nature’s Pharmacy (co-authored with Dr. Lynne Walker), and her latest book Web of Debt. Her websites are www.webofdebt.com and www.ellenbrown.com.