Israel, Anti-Semitism, Jew-hating, Freedom of Speech…pathological, hysterical reactions to justified criticisms. On the threshold of 2010 it is time the record was set straight. Every time PRAVDA.Ru (“Truth”) prints a piece which opens questions as to the legality of Israel’s policies, hysterical and utterly inane reactions rain down from supposed opinion makers…who represent what? 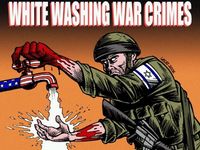 Take for example today’s piece by a gentleman named Mike Villano. From Tel Aviv? No actually, from California, USA who started his article by mis-spelling the name of the Pravda.Ru journalist he wished to take issue with.

For a start, the Lisa Karpova “article” he was commenting on was a translation from the Portuguese version of Pravda.Ru, of which I am Director and Chief Editor and she signs perfectly clearly her name after having stated “Translated from the Portuguese version”. The “Lisa Karpova” (not Kaprova as this gentleman writes) article is in fact a translation of one by Ramez Philippe Maalouf, an academic. Mr. Villano will have the powers to do a Google check on his name and creds. If he can spell the name right, that is. So while Mr. Villano spends three hours and a page and a half of nonsense criticising “Lisa”, not realising that he was dealing with a translation, he was also expounding theories which need to be addressed. And we shall do so in no uncertain terms.

For a start, Lisa Karpova’s translation from the Portuguese version of Pravda.Ru addressed the very serious issue of Israel’s legality in its execution of foreign policy. To this, Mr. Villano replies “Lisa may or may not ever learn the truth. The whole world may never quite learn the truth until it’s too late. Leave Israel alone”. Curiously, the writer says he, "bought into the notion that Palestinians are victims and that Israel stole their land for most of my time on this earth."

That he "accepted this version because I read the narrative in newspapers ever since I could read and had it confirmed through junior high school, high school and college as well as major news sources."

That is utter nonsense. The ability of this person to whine, to lie, deflect and to shamelessly demonize the Arabs speaks of a lifetime of being a Zionist propagandist. Certainly these ideas he says he used to have could never have come from the western corporate media, which is totally pro-Israel no matter how egregious their crimes are. Before one decides to protect a criminal and help cover up his crimes, one should examine one's conscience if one indeed has one. How can they sleep at night knowing that by helping to cover up these crimes they also now share responsibility for them?

Intelligent comment. And we have yet another. Wow! “Israel will not only defeat the Arabs should they be silly enough to allow their Jew-hating aspirations to get the better of what scant common sense they possess but the Israelis will also defeat the Russians and Chinese should they be silly enough to defend Iran. And America will suffer from turning her diplomatic and military back on Israel”. And another: “Obama, whose geopolitical and foreign policy instincts quite frankly stink”.

This gentleman must be a prophet. Such intelligent comments should make him a Senator indeed. Hey! He might even become the next “Toilet Senator”. Does he even realize when he speaks of his "mighty Israel" defeating Russians he is writing to a Russian publication?So while Mr. Villano is mis-spelling the name of the journalist he wishes to attack and while Mr. Villano is failing to recognise the difference between a translation and an article, one home truth straight from the shoulder right between his eyes: you do not have the quality to lick Lisa Karpova’s boots (the underside of).

Nobody is placing in question Israel’s right to exist. Nobody ever did in the translated articles that Mr. Villano (USA) decided to expound on. What is in question is the legality of Israel’s foreign policy.

Why should we? Give back the land occupied illegally since 1948, stop building colonies on territory which does not belong to Israel, stop expelling Palestinians from their homes, stop cutting off their electricity, go back to internationally recognised borders, stop building walls of exclusion, give back what has been seized illegally, stop shooting Palestinian kids in the eye with rubber bullets…Shalom! Until then be prepared for the onslaught. And next time, spell the name right at the beginning of your piece.