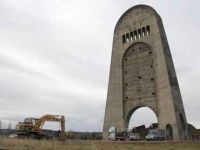 Kutaisi is not even the capital city, it is Georgia’s second largest city, but has become the site of yet another outrage being perpetrated by MikHEIL Saakashvili. The excuse being given is that a new parliament building is to be built. Saakashvili is fooling no one as he presides over the dismantling of the war monument located there. It is reminiscent of the dismantling of the Bronze Soldier in Estonia not long ago.

Georgia’s opposition parties are protesting against demolition of the military glory war memorial in Kutaisi. The memorial was erected 25 years ago to remember the Georgian residents killed in the Great Patriotic War. Over 700.000 Georgians fought in the Red Army. Some Georgians also fought on the German side in an attempt to secure Georgian independence in the event of a German victory. They are probably some of Saakashvili’s ancestors.

Members of the Christian-Democratic Movement began their action of protest in front of the memorial. They demanded that the authorities “ should stop dismantling the monument without taking into consideration an opinion of the public at large and name those who instructed the demolition.”

There is nothing, no evil, no sin, no injustice, no crime that Saakashvili won’t do in order to please his megalomaniacal ego. His people do not matter to him. However, he is not able to hide this fact from them. This may just be the impetus for a more genuine opposition to step forward and deal with this despot.

The Kutaisi city administration said, “ The memorial was plundered back in the 1990s. Its bronze parts and most of the fragments were stolen, therefore it is impossible to restore the memorial. Moreover, it is located on the territory where Georgia’s parliament building complex will be constructed. ” Yes that’s very believable. I guess they never heard of, “where there’s a will, there’s a way.”

Interestingly, however, the date when the monument is to be completely dismantled, the evil deed done, December 21, just happens to coincide with Saakashvili's birthday and that of Joseph Stalin, someone whose memorial statue still hovers above Georgian soil.

Saakashvili is no different than the other Eastern European countries, former Soviet States such as the Baltics that gravitate to the west. All have the same things in common: their disdain for history, their lack of respect and reverence for those who sacrificed their lives, their fascist tendencies and ideologies.

Hopefully this insult and travesty will be put to an end by the people of Georgia. Too bad Saakashvili cannot be dismantled, beginning with the rocks in his head.