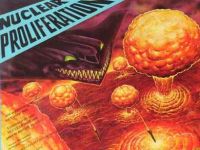 The Brazilian president has put his finger on a wound. Who has authority to determine which countries can join the atomic club and which not? For example, why must Iran be pressed to open their hand on their projects and Israel deserves tolerance? What logic obeys this discrimination? There is no wisdom, it is obvious, in betting on the dissemination of nuclear might as a way for peace. However, the unilateral or forced renouncing of atomic sovereignty under the terms currently in force, would mean de facto an acceptance of the geopolitics of supremacy.

President Lula, last week questioned the legitimacy of countries that have a monopoly on the bomb for themselves as critics of the government in Tehran. What is more, they made it a precondition for a strong and democratic agreement to dismantle all nuclear arsenals. This was enough to cause the utter indignation of some opinion makers.

The Brazilian delegate put a finger in the wound. Who has the authority to determine which countries join the atomic club and which cannot?

Let‘s return a little in time. The document that serves as the institutional basis for this arbitration is the Nuclear Non-Proliferation Treaty which was signed in 1968. At that time, at the height of the Cold War, it carried out the role of conjuring the risk of an atomic conflict.

With the world divided into two camps, the restriction on the military use of nuclear power in the hands of two superpowers, the Soviet Union and the United States, limited the possibilities of conflagration from countries that escaped the bipolar hegemony.

In practice, the States aligned to either of the superpowers and delegated their strategic defense to the lead nation's political and economic system to which they belonged. It was not a rule easy to deploy: France and China, members of the Security Council the UN signed the treaty only in 1992.

Obviously an agreement with this profile reinforced the hegemonic role of the Soviets and Americans.

The formula contained, in addition to nuclear duopoly rules, which forced relative equality between the two camps, avoiding the supremacy of one side or the other, created an insurmountable comparative advantage, would serve as incentive not to pull the trigger.

Atomic equilibrium prevented a clash between Soviet Union and the United States. Also, it set limits to military intervention in regional wars, as was the case of Vietnam, where U.S. forces could not use their nuclear arsenals. Finally, by blocking the proliferation of weapons of this nature, the chances of a catastrophe were reduced to what flows from the periphery to the center of the systems in dispute.

But the scenario that led to that treaty expired. After the Soviet collapse, the world plunged into a situation of inequality of military strength, marked by a preponderance of the United States, which assumed a praetorian and unilateral function on the nuclear issue.

The geopolitical consequences of this disparity are visible. The White House could, in the last twenty years, command wars of domination or occupation that would likely have been difficult in the past. Just to remember more egregious facts: did the process of pacification of Yugoslavia, Iraq and Afghanistan, occur in the era of bipolarity?

The regional allies of Washington began to rely on a very wide scope. The most emblematic is the Middle East. The military imbalance in favor of Israel, despite the fact that country so far has refused to sign the treaty of non-proliferation, is the cornerstone of U.S. policy.

The offensive and defensive fragility of Palestinians and Arab countries, apart from Iran, Zionism ensures not only Israeli border security but also the execution of a virtually unlimited expansionist policy. Military imbalance, after all, is a premise for imperialist hegemony.

The truth is that the United States, with the complicity of other nuclear powers achieved with an old treaty instrument with their supremacy, exactly one of the scenarios that was desired to avoid for forty years. The Americans are not strong enough, for example, to require the liquidation of the stockpiles of Russia and China, but the treaty prevents the emergence of new players cluttering its nuclear power strategy.

After all, even countries with a weak economy, unable to maintain regular armies equipped with the latest equipment, could develop the complete atomic cycle and create a tactical arsenal, with deterrence or medium-range, and increase their defensive capabilities. North Korea, which broke with the treaty in 2003, is evidence of this possibility.

There is no sense, of course, to be betting on the spread of nuclear power as a path to peace. But the unilateral renunciation of force for atomic sovereignty, nowadays, would signify accepting as immutable the geopolitics of supremacy.

President Lula, in his practical way, made it clear that the former treaty is expired. His words point to another type of agreement, based on the equality of all nations under international law. Outside this parameter, is the realm of hypocrisy.