One year on, President Barack Obama of the United States of America has done more for his country’s image abroad than the previous two administrations put together over 16 years. While the Clinton administration was bombing Serbia and creating the Kosovo question and the Bush administration was spending quadrillions of dollars on dubious wars, President Obama arrives as a breath of fresh air. 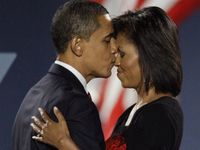 Proof of this is President Obama receiving his Nobel Peace Prize in Oslo. Not because he is black or white or grey, not because he is American or Kenyan or Indonesian, but because he is an articulate and intelligent person who represents the best interests of his country, namely creating bridges where previous administrations were bombing them.

For those who wish to present President Obama or his wife, the attractive and formidable first lady of the USA, Michelle Obama, as being lightweight, not up to the job, as an administration which endangers the United States of America, or worse, with racist undertones, as indeed there are many, it is important to place Barack Obama in context.

The context of Barack Obama is the world we live in, namely one in which we find ourselves collectively at a place where we should pride ourselves on having the opportunity to enjoy a globalization of knowledge and intelligence, not prejudice and hatred.

There was a time when the world was split in two, imperialist/colonialist regimes on one side holding down entire nations and peoples so as to gain control of their wealth (see for example statistics on the literacy rate in Mozambique at the time of its independence from Portugal: 97 per cent of the population was illiterate) and the Soviet Union on the other, spreading freedom and socially progressive governments, bringing education, industrialization and development where none had existed before.

There was also a time when Russians and Americans used to think the people on the other side were green because the only time they looked at each other was through an infra-red sight on a gun.

Fortunately, the nonsense that was sold to the people on both sides of the curtain, that the other side was evil, has long since been uncovered as nothing more than propaganda which both sides held on to, while the truth always remained in the middle. Black or white, yellow or brown, pink, blue or red, everybody with an education loves their kids, protects children, believes in a non-discriminatory world and even for those without an education, tears taste of salt. Period.

Now the Obama Presidency comes at the right time, after sixteen years of US Administrations which did everything to fuel the flames of the conspiracy theorists – first the unfortunate and surprisingly unintelligent decision by Bill Clinton to cavort with Kosovar Albanian mafia capos, carve off Serbia’s soul and then bomb its people (surprisingly because he is an intelligent, cultivated man who nurtures an authentic respect for the human condition) and then the Bush regime, complete with torture chambers, concentration camps, the curious relationship with Usama and the vendetta against Saddam (who hated Usama).

What Clinton started (although his foreign policy was far more conciliatory than that of his successor), Bush added to. Where Clinton lit a spark (and the notion remains that the Serbia campaign was wholly to divert attention from his private shenanigans in the Oval Office), Bush poured gasoline on the fire.

The result was the United States of America divorced from the rest of the world, derided as a pariah. The result was US citizens travelling abroad and apologetically saying they were “Canadians, really”. The result was millions of people around the world regarding the USA with a sullen and seething hatred.

The Clinton and Bush regimes handed to those who like to say “all Americans are fat and stupid” or “I hate Americans” or “all Americans should be killed” more ammunition than they could ever engender with their stupidity and sweeping generalisations.

This is where President Obama enters the stage. In just one year, he has done more for his country than the previous administrations did in sixteen. He started by ably neutering and placing a muzzle on the Rottweiler and Pitbull the Establishment placed on either side of him, respectively, the AIPAC darlings Joe “Russia will bend” Biden and Hillary “war zone” Clinton.

Secondly, he has launched a foreign policy based on humility, human values, respect and bridge building to which the people of the world have reacted positively, the result being the Nobel Peace Prize which was not premature at all. It was the Prize of Hope, as we stated before in this column.

It is time for the United States of America to capitalise on this opportunity it created. Washington will find today many friends who only yesterday were foes. It will find many smiling faces which before wore scowls. It will find many open hands ready to shake that of President Obama in particular and Americans in general, hands which used to hold a stone or a knife.

This is the context of the Obama Presidency, this is the enormous contrast between this Administration and the previous two and this is why Americans and the international community must get behind President Obama and not start finding weaknesses and faults.