Throughout the totalitarian West, the Marxist internationalist elites, while busily flooding their countries with tens of millions of third worlders, have introduced specific measures to keep the native populations down and in check. 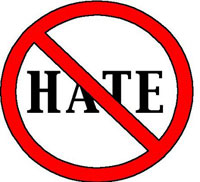 These measures have come in the form of Hate Crimes Laws. The laws state that a crime is not just a crime if we can find a deeper motive, such as hate of a specific race, sex, religion or sexual orientation. Thus the Lords of Humanity have given themselves the power of God to know what is inside the hearts of men.

In practical terms, what this means is 1. A murder is not just a murder if hate is involved. Say again? This means certain lives are worth more than others, a protected class, another insult to Christ and justice. 2. If the local jury trial is considered to lenient, then those globalist elites of the West can try the person again for "hate" or rather in actuality for the same crime, twice. Again, an insult to justice that Western serfs bow, grin and bare.

But this gets worse, since in practice, the elites decide who is a racist and who is not, they use these laws sparingly to keep the native population down, shackled and paranoid of the knock on the door.

In America, anti white violence is exploding, an average of 12 people per day are killed by their illegals and three times more whites and Asians are killed by blacks than vice versa. The same can be found in England. The head of the Justice Department, Hader, even stated that he approved the double standard used on whites. He did this in front of a parliamentary committee, with no real out cry by the totalitarians. As if any should be expected.

When five blacks kidnapped a white couple, raped and murdered the man, than kept the woman for further rapes and poured bleach down her throat to kill her, there was no hate crime, even though those five became the idols of black racist groups in American. When blacks in Los Angeles target Koreans for robbery and murder, also nothing. Nor when Mexican gangs ethnically cleanse one street after another. When Islamic Pakistanis in England beat an Anglican priest almost to death, in front of his church and screamed how they were going burn down the church, or when other Islamics poured acid in the face of a raped school girl, nothing happened. No hate crimes. When Islamic Turks murdered the white, Christian boyfriend of a Turkish girl, in Germany, not a hate crime. When Arabs and Pakistanis in Athens attack and burn Greek Orthodox businesses, not a hate crime. When the director van Gogh is brutally murdered by an Islamic assailant, not a hate crime. However, his Dutch film, showing the plight of the women under Islam, beat and abused, well, most definitely that is a hate crime...the film, not the wife beating, that's just quaint multiculturalism, supported by the Western femiNazis, who have a secret lusting for this type of treatment.

Luckily, in Russia, Ukraine, Serbia and all none EU, none West Christian nations, this idiocy does not exist. Murder is murder, regardless of what is felt by the killer and defense of the local culture is paramount.

Westerners, truly I believe, you deserve this, since the vast majority of you take it and swallow it, like the good little castrated serfs you are. Enjoy your extinction, as you loaf around on your Chinese couches.