The title of this piece purposefully uses three of the four languages spoken officially in Switzerland, lacking only the Romanche of Confederaziun svizra . To what extent has the Minaret case been entirely misunderstood by a world looking for stones to throw instead of bridges to build? 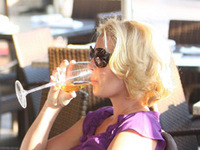 There are a number of important points raised by the Swiss referendum last weekend, in which 57.5% of the population voted against the construction of more minarets on Mosques, which provoked a plethora of knee-jerk reactions from the four corners of the Earth. However, at a time when globalism is a reality and multi-cultural societies a fortunate blessing our generations have been gifted enough to witness, it is important that national pride, nationalism and xenophobia, racism and Fascism be very clearly outlined and understood.

For a start, the Swiss have referendums on issues of national importance. Maybe the European Union could take a leaf out of their book, because the only organism in the EU which is democratically elected has limited executive power (the Parliament) and the organisms that have power are not elected. If Switzerland were in the EU, they would be forced to repeat the referendum (given they dared to have one) ad nauseam with subtle changing of wording until Brussels was satisfied. They would then probably be forced to give the Albanians a canton (which by the way has been asked for).

Secondly, the vote against the construction of new minarets did not have to be an expression of fascism, racism or xenophobia because it is not necessary to be a racist or a non-racist to be rational. Rather than reflecting anti-Moslem sentiment, was the decision not more connected with wanting to maintain Switzerland’s unique skylines and façades? Rather than being anti-Islam, was there not a significant mobilization of women’s rights groups who have a problem with the way women are treated in certain societies?

Thirdly, for those who jumped on the bandwaggon and started accusing the Swiss of being Nazis, a Mosque does not need a minaret to be a Mosque. It needs to be clean and needs to be pointing towards Mecca.

Surely, since the Swiss have been independent since 1291, and since the Swiss Constitution gives the Swiss the right to decide what happens in their country, the referendum of last weekend should be respected. After all, it is up to the Swiss to decide, and nobody else.

There is nothing wrong with nationalism to an extent in which it reflects pride for the nation and its culture, history and institutions, especially in a world where there is so much disrespect and irreverence from those who have offered nothing whatsoever to their societies. Iconoclasm just for the sake of it is like a terrorist without a cause...namely, a common criminal.

This is not to say the Swiss are wrong to state they do not want their (beautiful) Alpine skyline dotted with minarets, this is not to judge the Saudis for imposing their (wonderful) Islamic culture in their own country, this is not to question the decision by a (sensible) municipal authority not to allow a McDonald’s to be built next to a medieval cathedral.

In today’s multicultural world, we have to tread carefully but remain both respectful and aware. The people of the United States of America set a wonderful example in electing President Obama, not because he is black (he is as white as he is black after all) but because he is intelligent, articulate and presents a figure all Americans can be proud of, the more so after eight years of the idiotic self-justification of the torture-chamber Bush regime. The Russian Federation understands the question of multiculturalism very well and very deeply: what is Russia, if not a myriad and fantastic mix of peoples and races and creeds and colours and cultures and religions and gastronomies, making it the wonderful place it is?

The Swiss vote was not about xenophobia or racism. Neither have any place in today’s world, because today’s world is one in which the globalization of knowledge and access to education are thankfully becoming a birthright, and racism is simple a reflection of petty-mindedness, proof of ignorance and a demonstration of an intellectually challenged brain.

So let us not confuse nationalism with National Socialism (Nazism), let us not confuse pride in our culture with xenophobia and let us not confuse the zeal to protect national heritage with racism. Nobody needs to be chez eux (in their own home). Unter uns (amongst us), everybody has the right to be themselves, but one man’s freedom ends where it affects that of the next. For as Ortega e Gasset stated, “Yo soy yo y mi circunstancia” (I am myself and what surrounds me).