To the author of the Pravda.Ru article, Yes We Noticed. 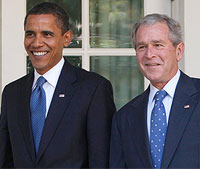 For a person who seems to spend a great deal of time “noticing” things, how could you have missed the following?

We noticed the idiocy of someone thinking that wearing a flag pin on one’s lapel is somehow synonymous with what one wears in their heart.

We noticed a blustering and inept George W. Bush telling Iraqi insurgents to “bring it on” from the safety of American soil, after using his family’s wealth and influence to avoid combat service in Vietnam.

We noticed how the “big bad warmonger” Dick Cheney received five deferments to also avoid serving in Vietnam. An avid hunter, Cheney apparently isn’t man enough to face anything with the ability to shoot back.

We noticed how the Bill of Rights was shredded under George W. Bush, and how the Justice Department and CIA, under his “watch,” became a safe haven for torturers and war criminals.

We noticed how many sheepish dupes, under the misguided banner of “patriotism,” are willing to spend billions of dollars, and sacrifice thousands of lives, waging wars based upon nothing but lies, yet think it’s comparable to “Nazism” to spend a penny to enhance the quality of life through meaningful health care reform.

We noticed how Bush exploited this misguided “patriotism” to divert attention from the elections he stole, and how he began these wars to satiate his megalomaniacal lust to become a “wartime” president and his delusional beliefs that God had somehow ordained him to be the next Abraham Lincoln.

We noticed how Cheney also exploited this misguided “patriotism” to enrich his cronies in the military-industrial complex through “no-bid” rebuilding contracts and other forms of corruption.

We noticed how many architects and supporters of Bush’s wars went to extraordinary lengths to avoid military service, thus expecting sacrifices from others they were too cowardly to make themselves.

We noticed how the Rush Limbaughs, Glenn Becks, Sean Hannitys and Bill O’Reillys of the world prey upon human ignorance, bigotry and hypocrisy to build careers and acquire wealth and fame they do not deserve, while journalists with integrity and honor are ignored because they tell people what they need to hear, not what they want to hear.

We noticed how Senators like Joe Lieberman and Evan Bayh are in the pockets of the health insurance industry, with Bayh’s wife sitting on the board of directors of Wellpoint Inc., one of the nation’s largest health insurers.

We noticed how Bayh, like Bush, built his political career on his family name and influence, and is now, also like Bush, using that career for personal aggrandizement, instead of for the good of the people who elected him.

We noticed that even though Lieberman routinely betrays his alleged “independence’ by genuflecting obsequiously before the party of the three “R’s”—rich, racist and reactionary (aka the Republican Party)—he is too gutless to label himself a Republican.

We noticed that the words “Joe Lieberman” should replace the words “Benedict Arnold” as a synonym for “traitor” in American lexicon, because Arnold at least had the courage to place himself in the line of fire during the American revolution, being wounded twice in the process, while Lieberman’s warmongering “bravery” is akin to the deferment seeking Cheney’s.

We noticed how many of the same people who allege they are “pro-life” oppose health care reform that can improve the very lives they claim to be “pro” to.

We noticed that virtually every industrialized nation in the world is laughing at the fact that the United States, the richest nation on earth, cannot even provide adequate health care to all its citizens.

We noticed how rarely demagogues and hypocrites are on the right side of history, yet how often they have slowed history’s progress.

Flag pins, crass exploitation of patriotism, appeals to the vilest elements of human nature, and the ranting of idiots whose lies are believed by millions simply because they sit behind microphones and run their mouths do not good government make. It’s time for Americans to realize that these are simply tricks used by the military-industrial complex, the health insurance industry, the wealthy, the corporate-controlled media and other special interests to lure common people into slitting their own throats.

So stop looking for the outer signs that politicians routinely use to seduce voters into thinking they are more “patriotic” or “ethical” than their opponents. It’s time to notice that even Jesus said the worst hypocrites of all are those who conspicuously display their alleged “piety” for the world to see, because they are not seeking to honor God, but to impress their friends and neighbors.

And yes, author of the “Yes We Noticed” article, we noticed that you remained anonymous, which apparently means you don’t even have the courage to affix your name to opinions you allegedly believe in.

At least Obama isn’t hiding behind a veil of anonymity. So I hope that those who read your rants will also notice how hypocritical you are to hide behind such a veil while condemning him.