For those who consider that the title of this piece is inappropriate, I would retort that the puerile, inconsequential petty amateur drama society histrionics taking place today in Berlin, with a mock “domino display”, reaches the sublime in terms of stupidity and the zenith of absurdity, inanity and insolence. 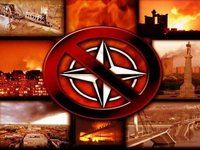 An analogy in Latin was chosen for the title of this piece to remind those who heralded the German Reunification and the “collapse of the Soviet Union” (a notion as wrong as it is Revisionist) that once upon a time the European Union really did exist, per se, with a single currency, a single legal system and even a single language. What happened to it?

So, agglomerations of countries are formed and separate, under a natural social and economic process and this is exactly the case with the USSR, whose dissolution was predicted and catered for in its Constitution. It is not the fault of Moscow if Georgia, for example, failed to live up to its obligations regarding its responsibilities upon secession from the Union.

These social and economic vectors must also be taken into account when studying sensitive areas of history in which political ideals constituted a very small part when we compare with demographic, sociological and developmental players, which moved in all societies at all times over the centuries.

While nobody is defending the killings of people who tried to cross the frontier of the DDR (although everyone knew the consequences of such) and while nobody is belittling the horrors of the Stalinist purges, things have to be taken in context. Why is the Communist model blamed for these tragedies (understanding that the loss of a human life is always a tragedy) while for example the massacres perpetrated by the Imperialist powers across the globe were due to what, their market oriented systems? Is Capitalism to be blamed for the US attempts to murder Fidel?

For those who curl up giggling hysterically with such intelligence today when the dominoes start to knock each other over, let us remember that the Socialist model was instituted in Central and Eastern Europe by nationalists who had fought and defeated one of the worst scourges in the history of Mankind – the Nazi Fascist regime, complete with its mass murder, racism, genocide, crimes against humanity, the gas chambers, the ovens, the deportation of people in conditions of utter depravity…and the death of nearly 27 million Soviet citizens who died freeing Europe and the world from tyranny. Will this be printed on the dominoes? No, it will be conveniently forgotten. We even have E.U. member states which glorify Nazism!

For those who cheer in a drunken stupor when the dominoes start to fall, let us remember

the great values represented in the former Socialist societies which after defeating the Nazi tyranny exported the Revolution by exporting Freedom, taking the fight far away from the frontiers of Europe and launching the freedom movements against Imperialism and Colonialism (the same regimes which just a few years before had been responsible for the other unspoken Holocaust – slavery), fighting selflessly for the development of societies, making excellent education and healthcare systems a reality while striving to create and protect basic human rights. Will this be forgotten on the dominoes? Of course!

What was created, then, and let this be remembered as the dominoes fall, was a progressive social model in which the State provided excellent and gratuitous healthcare systems, education systems, a social model which instilled the notion of progress through excellence, free housing, transportation, utilities, a guaranteed job and pension, leisure time and cultural activities to fill it.

Then let us celebrate and cheer with the fall of the dominoes, what has substituted this system and visited upon the streets of East Berlin, Budapest, Prague, Bratislava, Warsaw, Sofia and Bucharest, to name but a few cities, something they had never even dreamed to exist, namely drug addiction, prostitution rings, human trafficking, horrific statistics of street crime, disobedience, wanton vandalism and destruction, disrespect for the person and for property, anti-social behaviour, endemic unemployment, total insecurity in securing a basic need such as a house (it is a drama to obtain one and an even greater drama to keep it), an education system which has become a business (how many tens of thousands do Masters’ or Doctoral theses cost?), the collapse of a public healthcare system, in a world where pensions are no longer guaranteed by countries which preach one thing in the WTO (free trade) but practice protectionism, tariffs and subsidies to make sure the haves keep it and the have-nots are locked out.

For those who cheer the falling dominoes (they would find a scene of destruction appealing would they not?) and cheer the word “freedom”, let us remember the fallen dominoes of Abu Ghraib prison, Guantanamo Bay (were these built by communists?), the torture sessions practised by CIA agents, water-boarding…and for those who cheer “democracy”, well how undemocratic is the European Union, where referendums are not held if it is thought that the result will be negative, or repeated ad nauseam until they become positive and where the only institution that is elected democratically has no executive power?

For those who applaud the falling dominoes, why didn’t they applaud the collapse of the liberal monetarist capitalist market-oriented system and when they deride the Socialist systems asking how to pay for it, we remind them that money was available suddenly, and plenty of it, to the tune of trillions of dollars, to bail out the super-rich clique of capitalist elitists just a year ago.

So for those who think it is funny or clever to chortle in contentment seeing a few dominoes falling over, then Dominoes Vobiscum! And you know where to stick them!