Twenty Years after the Fall of the Berlin Wall, the EU is a Reincarnation of the Former Soviet Union 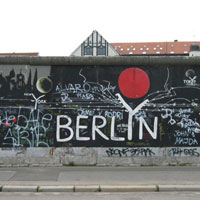 Twenty Years after the Fall of the Berlin Wall, the EU is a Reincarnation of the Former Soviet Union

Now that the Czech Republic has announced it will ratify the Lisbon Treaty, the EU will be even closer yet to becoming a unified monster state, with more than half a billion inhabitants. Inhabitants is the correct term, since “citizens” would indicate a set of political rights. The people living in the EU should rather be called “subjects,” since they have no influence whatsoever on the constitution of the centralized European government, the “European Commission.” The Europeans are allowed to vote for members of the European Parliament, but this body has about as much political power as the ineffectual German parliament meeting at Frankfurt in 1848. Political power in the EU is firmly in the hands of the European Commission, which is set to obtain even more power under the Lisbon Treaty. This infamous treaty does not hold the peoples of Europe in high regard. As a matter of fact, it is only halfway through the treaty (originally presented as a “Constitution”) that one finds the first references to the people.

The first impression one gets while reading through Chapter III of the Lisbon Treaty (the so-called reader-friendly text), is a rather favorable one. This so-called Charter of the Fundamental Rights of the European Union “ places the individual at the heart of its activities, by establishing the citizenship of the Union and by creating an area of freedom, security and justice.” That really sounds grand and reassuring, does it not? Reading on, one clause seems even more impressive than the other.

The list goes on and on. The Lisbon Treaty obviously is an effort to put together the most enlightened elements of all existing European constitutions. Therefore, as far as these “fundamental civil rights” are concerned, the Lisbon Treaty may be regarded as having taken effect already, at least in most of the EU.

It is quite enlightening to take a look at the way the lofty articles cited above are being put into practice. Take “human dignity,” for instance. As a result of the benefits Neoliberal Capitalism has been showering on Europe since the fall of the Berlin Wall, by day the streets of most European cities have become a living room for increasing numbers of homeless. At night these streets are transformed into open-air bedrooms, with the homeless making themselves comfortable on mattresses made out of flattened cardboard boxes. The streets seamlessly convert into dining rooms whenever the homeless are hungry. Then they go about scavenging for leftovers among the rubbish in dustbins and garbage containers.

And what about the CIA rendition flights to secret torture centers in EU member states Poland and Romania, with most other EU member states giving clearance for these flights through their sovereign airspace? So far, some 80.000 individuals are believed to have been abducted in this way, many of these with the full collaboration of the EU and its member states.

Clearly in the EU, “human dignity” is not inviolable, nor is it being respected or protected. The treatment meted out to EU citizens suspected of terrorism is a violation of articles 3:1 and 6. Their physical and mental integrity is not respected in any way, and their right to liberty and security of person is trampled on, courtesy of all 27 EU member states.

All talk about human dignity, physical and mental integrity, and liberty and security of person is empty. It is empty because the security of the state (the EU and its member states) is deemed to have priority. You can find proof in the Lisbon Treaty, Title II, article 67:2 “ The Union shall endeavour to ensure a high level of security through measures to prevent and combat crime, racism and xenophobia, and through measures for coordination and cooperation between police and judicial authorities and other competent authorities, as well as through the mutual recognition of judgments in criminal matters and, if necessary, through the approximation of criminal laws.” The clause seems bland, but it means state security (however defined) takes precedence over the rights of individuals.

Article 8 is also very interesting. It would seem to state that one's personal data are safe. But are they? Under current EU regulations, member states are required to keep records of all e-mail traffic and all telephone conversations. In fact it is as if the government would be reading all your letters. Many EU member states, the government can enter your computer at will and change data and records on your computer without your knowing it. All this snooping and spying is, of course, in the interest of state security, to “fight terrorism!” It all looks as if the Nazi slogan “Du bist nichts, dein Volk ist alles!” (You are nothing, your people is everything) were put into effect in today's EU.

Ah, and then there is, of course, freedom of expression. Article 11 establishes this unequivocally. Currently, all 27 EU member states have such a provision in their constitutions. Yet on at least two issues, EU citizens do not enjoy this freedom of speech. In a number of member states (Germany, Belgium, Austria, France, the Czech Republic) it is a criminal offense to publicly wonder whether six million Jews were killed by the Nazis during World War II. Even if you would believe that, say, no more than 4.5 million Jews were exterminated, this could land you in jail for years. It is effectively prohibited to conduct research into this topic (to try to establish how many Jews were killed during WW II), because it makes you a “Holocaust denier.”

Nor is it allowed in some states to make any sort of remark criticizing islam. This will immediately cause you to be prosecuted for what in the US is called “hate speech.” This is happening to Dutch politician Geert Wilders, who will be put on trial next January for making allegedly disparaging remarks about islam, whereas what he really did was assemble a movie using available footage, to demonstrate the violent nature of islamic teachings.

Thus in the EU today, there is NO free speech. Nor will there be any when the Lisbon Treaty takes effect. The EU crackdown on “illegal” downloads, threatening anyone caught downloading copyrighted items more than three times with lifelong exclusion from internet access, can be interpreted as an indication that a major offensive against one of the few remaining vestiges of freedom is underway.

I am afraid the EU “constitution” (rejected by European voters wherever it was subjected to an honest, fair referendum) in its warmed over version called “Lisbon Treaty” is no more than a useless piece of paper. It is about as meaningful as the old Soviet and East German (GDR) constitutions which, come to think of it, are surprisingly similar to the Lisbon Treaty.

Article 50 of the 1977 Soviet Constitution granted all citizens freedom of speech. But whoever dared voice criticism of the system in any coherent, vocal way, was severely punished. Punishments included loss of job, domestic exile (nuclear scientist Andrei Sakharov), and assignment to a mental hospital. There was no free speech in the old Soviet Union, like there is no free speech in Europe today.

Similarities between the Lisbon Treaty and its communist predecessors are quite remarkable, for instance in the clauses on equality before the law.

Article 34 of the 1977 Soviet Constitution proclaimed full legal equality for all: “citizens of the USSR are equal before the law, without distinction of origin, social or property status, race or nationality, sex, education, language, attitude to religion, type and nature of occupation, domicile, or other status.” The East German Constitution echoes this. Article 20:1 reads: Independently of his nationality, race, religious ideas, social background and position, every citizen of the German Democratic Republic enjoys the same rights and duties. Freedom of religion and belief are guaranteed. All citizens are equal before the law.” Coincidentally, the Lisbon Treaty is strikingly similar: “ Everyone is equal before the law ” (article 20), and “ Any discrimination based on any ground such as sex, race, colour, ethnic or social origin, genetic features, language, religion or belief, political or any other opinion, membership of a national minority, property, birth, disability, age or sexual orientation shall be prohibited” (article 21).

And just to remind you, in the former communist world of Europe, basic human rights such as these were formulated in the Soviet and East German constitutions, were violated on a daily basis. Henckel von Donnersmarck's shocking movie “The Lives of Others” (2006) shows this in a most penetrating way. The Stasi, inheriting brutal, effective Gestapo methods, was keeping tabs on most of the East German population. Under the pretext of fighting terrorism, it listened in on all telephone conversations, opened all envelopes and read all letters. It kept controls on anyone entering or leaving the country. An army of almost 100,000 secret agents, helped by 200,000 civilian collaborators, spied day and night on East Germany's 16 million citizens. Most European governments today are using time-honored Stasi techniques to keep their citizens under surveillance. However, technology has advanced so impressively since the fall of the Berlin wall in 1989, that today's government spooks glean more information on unwitting civilians than the most fanatical Stasi agent would have hoped for in his wildest fantasies.

As recently as 2006, a most eloquent and insightful warning against the EU and the Lisbon Treaty's precursor, the ill-fated “constitution”, was given by former Soviet dissident Vladimir Bukovsky. Traumatized by the experience of living in the Soviet Union, Bukovsky noted the deeply disturbing similarities between the old Soviet Union and the blueprints for the EU super state. The European Commission, he noted, was the exact equivalent of the old Soviet Politbureau, in terms of the secretive way power was exercised, the recruitment and personalities of its members and the scope and reach of its decisions. The “European Parliament” today (and under the terms of the Lisbon Treaty) is a mere rubber stamp institution, just like the “Supreme Soviet” of the old USSR.

As a matter of fact, there are so many similarities between the old Soviet Union and the EU that mere coincidence is unlikely. Bukovsky argues the EU was designed to be like the old USSR. The architects of the EU? Mostly social democrats, whom Stalin quite aptly called “Social Fascists.”

Most Europeans have not yet understood this. Most are still indifferent, but their indifference will soon vanish when the full weight of repressive EU policies and EU taxation doing its destructive work will be felt.

Sooner than anybody now thinks, the only way to vent criticism of the EU will be in the form of jokes. No doubt many of the characteristic old Soviet jokes will be dusted off and given an anti-European Commission twist.

By that time, all Europeans except for the privileged class of “eurocrats” will be prisoners in the EU. However, they will certainly have a wonderful Constitution.