Halloween: Anglo Paganism On The March

The Holy Orthodox Church has for several years now come out strongly against the imported "holiday" of Halloween. What to many Russians and others around the world may seem like a fun night of kids masks and candy, is indeed an evil day of a vile paganist religion built upon the blood of sacrificial victims. 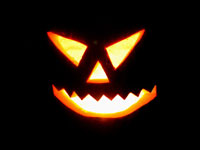 Halloween: Anglo Paganism On The March

The holiday was originally named Samhein, the Keltic New Year, which started with the day of death. Yes, unlike most cultures, to the ancient and not so ancient Kelts, the year started in death. The western Orthodox Church, four hundred years before the Great Schism, attempted to paper over the meaning of this holiday, while Christianizing the Kelts of Gaul and England. In its place, it created All Saints Day or Holy Eve which became Halloween.

However, the evil of the day, it meaning and rituals were never far from the surface. With the West in a post-Christian culture, paganism, even the most vile forms of it, quickly have returned and the vilest have reclaimed their day of death. But what makes this day so evil?

Most people in Russia and in truth, most people in the Anglosphere, do not know anything about this dark day. The day was when the realm of the dead crossed the realm of the living and the dead would walk amongst humans, as well as demons and other fell beings. The ghosts must find a host to take over to have life for the next year or they will go back to the land of the dead. This in turn lead to several customs.

First, all fires were doused, so as not to draw attention. Scary faces were carved in beats and candles lit. Pumpkins were a later adaptation by irish immigrants in America. Scary masks were worn so that the living would look like the demons walking the land and thus would not get possessed. Treats were given out to appease the hungry dead.

The god of the hunt also lead a wild frenzy through the land, where people could either join as hunters or became the prey.

The worst of the holiday were the druid fires. All fire was kept in a central druidic sanctuary and brought to the local bonfire, where the local druidic high priests held vigilance. In the fire, before it was lit, were placed living human sacrifices. Most of the time, they were captured war prisoners, at other times drawn by lot. These sacrifices were burnt alive, their screams of death and pain fed the evil godlings that the Kelts worshiped. From these fires, built upon the lives and souls of sacrificed people, were lit the fires of every house of the local villages on the morning light of the new year of the Kelts.

These customs have nothing to do with our Slavic history or prehistory, either Christian or earlier pagan. In the case of us Rus, they have nothing to do with the Ugric nor Varengin Rus histories and cultures. They are an unwelcome import, a cultural imperialism from the Anglo-Sphere, hoisted upon us. It is a day on which many vile acts are carried out and on which the reborn pagan cults, which riddle the West in general and the Anglo-sphere in absolute infestation, celebrate their dark beliefs.

As Orthodox Christians and as Russians, we must refuse and reject this vile day.