Eastern Europe: Caught Between Their Own Past and Nazi/US New World Order 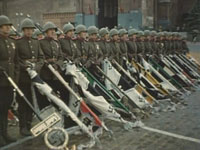 Eastern Europe: Caught Between Their Own Past and Nazi/US New World Order

Seventy years ago, World War II began with the Nazi attack on Poland. First Europe and then the rest of the world was plunged into a long war that still today influences much of our lives, our beliefs and our ways of thinking. Although most people would believe that the Nazis carry the main responsibility for the war, ever more proof that this was not the case is becoming available. If Adolf Hitler can be blamed for starting the war, he was provoked, aided and abetted especially by the British. It is certainly not true that the Soviet Union was to blame for it, as so many in the “West” would have it. Concurrently, the fact that it was the Soviet Union that defeated Nazi Germany almost single-handedly (as proven by British historian Norman Davies), is not found in mainstream “Western” historiography, and most certainly not in school and college textbooks, let alone on TV or the popular media. This is how the “West” has been distorting history since 1945. Today, these traditional, distorted “Western” views are being adopted by a number of Eastern European nations.

Just the other day, Russian president Medvedev vented his anger at the persistent attempts to rewrite history in numerous states that were once part of the Soviet Union. The small Baltic states of Estonia, Latvia, Lithuania are at the forefront of the efforts to rehabilitate the many thousands who enthusiastically fought under German command during World War II. At the same time they are trying to eliminate all traces of the Soviet world they were once a part of. Monuments to Soviet soldiers are being torn down.

The Soviet Union is routinely being painted in the darkest of hues, to the extent that it is being presented as just as evil as the Nazi regime. Granted, there may be some unpleasant similarities between the Soviet and Nazi regimes, but there were some big, fundamental differences. Whereas the Nazis were racist, ruthless adventurers invading all their neighbors and conquering much of Europe, the Soviets under Stalin were mainly bent on protecting their borders. And the Soviet Union may have been many things but it definitely was not racist. It makes little sense to compare Nazi Germany with the Soviet Union. Rather, Nazi Germany had much more in common with the US and Britain. The fact that today, the US and Britain so closely resemble Nazi Germany is no coincidence.

In order to clarify matters, it may be useful to outline the extent of the support the Nazis received in the Baltic and elsewhere. Some 70.000 Estonians enlisted as soldiers in the Nazi armed forces, joined by 90.000 Latvians and 125.000 Lithuanians. Many of these served in crack, highly motivated, fanatical SS-units. Counting the thousands of others who in some way or other collaborated with the Nazis (as drivers, nurses, administrators, etc.), the number rises to well above 300.000. But let us stay at this round number, just to be on the safe side. In 1939, the aggregate population of the three Baltic republics stood at about 5.4 million. Roughly half of these were men, and roughly one third of the men would qualify for some form of military service, the remainder being too old, too young, or unfit. That means that about one in three men qualifying for military duty were collaborating with the Nazis. Such rates of collaboration were extraordinarily high in Europe.

Elsewhere in the East, collaboration was also impressive. Some 30.000 Georgians fought under Nazi command, alongside 40.000 Azeris, Daghestanis and Chechens, 20.000 CrimeanTatars, 20.000 Armenians, not to speak of the many tens of thousands of Ukrainians. Same story in the Balkans, where some 20.000 Bosniaks filled the ranks of the fearsome SS Handschar division, and 6.000 Albanians served in the SS Skanderbeg division.

Hungary, Slovakia, Croatia, Bulgaria and Romania constitute a special category, since they were formal Nazi alies, supplying the Nazis with the full force of their conscript armed forces, numbering hundreds of thousands of soldiers. Of course, Italy was also a Nazi ally of the first hour, but in the summer of 1943, Italy switched sides and began fighting as an ally of Britain, the Soviet Union and the United States.

Still, the bulk of Nazi collaborators was to be found in the East, precisely in those regions that today are so anxious to rewrite history. That they would do so is hardly surprising. After some five decades of being either a part of the Soviet Union, or a Soviet satellite state, they feel they have now become truly independent. But what did they do with their newfound independence? Very little, I am afraid: they eagerly threw themselves into the arms of the United States.

When former US defense secretary Donald Rumsfeld characterized Eastern Europe as the New Europe, he struck a very receptive chord. Here was a term that the Eastern Europeans knew quite well. After all, when similar words were used by the Nazis they had reacted enthusiastically. Hoping to be richly rewarded in every sense of the word, they were forced to privatize the most prosperous and profitable parts of their economies. Privatizing being just another word for the takeover at a ridiculously cheap price by foreign-based transnational corporations. Then, their social safety nets were systematically destroyed, education and health care were “gleichgeschaltet” (synchronized) with often poor “Western” standards. Their armed forces were “professionalized” according to the questionable management standards of NATO armies and turned into mercenary forces for US military adventures in the Middle East and Central Asia. Within a few years, the former Warsaw Pact members and newly independent former Soviet republics had acquired most of the outward trappings of the “West,” symbolized by boring hotels with posh atriums and smoked glass facades, new airports, fancy motorways, dreadful food served by brand new outlets of McDonald's and KFC, and so on and so forth. Now that the true dimensions of the current crisis are beginning to appear, many must be seriously questioning the wisdom of throwing overboard everything that was to do with the “Old Regime.” I suspect Eastern European states and the newly independent former Soviet Republics must now be coping with a serious identity problem.

What is their place in history? The answer seems right at hand. Many Eastern Europeans still seem to believe they were excluded from history when they joined the Soviet Union or when they became Soviet satellites. When the USSR collapsed, they were too busy to take down the monuments to Lenin and to align their economies and societies on perceived “Western” models, to worry too much about their place in history. By now, “the New Europe” has found out that whatever they were once told about communism was wrong, but that everything they were told about capitalism was true. They are trying to regain firm historical ground.

Now, what is more logical than to turn to the last time many of these states were independent? That is to say, to World War II. Many then were fighting against communism and for a “United Europe” alongside Nazi Germany either as allies or as parts of the Third Reich. After enjoying half a century of peace under Soviet rule, today Estonia, Latvia, Lithuania, Hungary, Slovakia, Croatia, Romania, Bulgaria, the Ukraine, Georgia and Azerbaidzhan are again fighting somebody else's wars. Once again, they are the privileged purveyors of mercenaries to an evil empire. The Nazis valued them as sources of high quality manpower in their epic struggle with the Soviet Union. Today these very same states are being valued by the US as a source of manpower for their quixotic adventures in Iraq and Afghanistan.

Of course they are revaluating their Nazi collaborationist past. This is not surprising, since the Nazi crimes are implicitly approved in the “West” today. Measured by the standards of the present-day United States, Nazi political, social and military practices are quite OK. Whether it is invading and occupying countries, bombing cities and killing thousands of innocent civilians, the systematic use of torture and terror methods, operating concentration camps, spying and snooping on innocent citizens, mass-killing of alleged enemies of the state in foreign lands, daily bombardment of the population with deceitful propaganda, the US is behaving like Nazi Germany every inch of the way. The Eastern Europeans must be associating the Brave New World in which they now find themselves with the Nazi environment they were once a part of.

By allowing themselves to become mere US neocolonies, instead of mature, independent states, Eastern European elites have done their countries a gigantic disservice. By joining the US Evil Empire, Eastern European nations are jeopardizing their own rich historical heritage. They seem to be forgetting that it is precisely that heritage that makes them part of European culture. It should never be forgotten or spoiled by joining the US empire and thereby denying everything that made Europe what it is.

Now that the fundamental weakness of the US Evil Empire is becoming ever more apparent, it is hardly surprising the Eastern Europeans are looking back at the Nazi period with nostalgia. Ater all, everything from the past always seems to be better than the present.

If the Eastern Europeans are truly in search of their identities, they should encourage wide ranging historical research to begin with. They should not stop at the Second World War. For instance, the lands that now comprise the Baltic republics entered written history when they were conquered by the Teutonic Order. It is impossible to ignore the historical role played by non-Baltic peoples such as Germans, Swedes, Danes, Poles and Russians. Yet this is precisely what the present-day Baltic states are trying: to write these peoples out of their histories. It would be as ridiculous if, say, President Evo Morales would attempt to rewrite the history of Bolivia without making any reference whatsoever to the Spaniards.

I am afraid the Baltic peoples and by the same token, many other Eastern Europeans, still have a long way to go before they have found their true historical identities and before they have come to terms with their past, no matter how uncomfortable it may be. One simply cannot ignore the past. And there is always a high price to pay for falsifying it and rewriting it.