Georgian Act of Slaughter: Remembering the victims, one year later

A year ago, the murderer and war criminal, friend of Washington and NATO, Mikheil Saakashvili, gave the order to his armed forces (backed by the United States) to attack South Ossetia. They believed that the Russian Federation would do nothing to protect its citizens. The western media immediately supported the Georgian side and launched a series of lies against Russia and then said that Russia lost the media war. 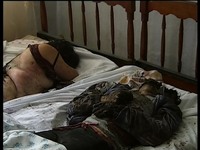 Georgian Act of Slaughter: Remembering the victims, one year later

The Western media failed to understand what happened in the early hours of August 8, 2008. Professional journalists, who had a duty to investigate the issue, literally contented themselves with vomiting gibberish, nonsense and garbage in the pages of their newspapers and even on TV, while Georgian missiles that were raining on the civilians in Ossetia were described with subtitles such as "Russian" ones traveling to the south.

These were study cases in ignorance and geo-political propaganda, used to manipulate public opinion against Russia in the face of the most cowardly and despicable attack in which acts of murder and genocide against civilians were perpetrated.

Throughout the Western world, the Georgian attack was transformed into an act of "disproportionate use of force" by Russia, while Moscow was careful to wage a limited campaign and regulate the response to the horrendous act of aggression by the friend of NATO.

And what happened? Today, the Research Commission of the Russian Federation exposed the list of crimes committed by the Georgian armed forces (supported by the forces of a member of NATO) on the 8th of August 2008. Six hundred and fifty-five (655) houses were destroyed and burned. More than 33,000 people of South Ossetia were forced to flee their homes, many of these people being elderly, women and children.

The Georgian forces used cluster bombs (banned internationally) and 500 kilogram bombs against civilians. Mothers and their children hidden in basements of apartments were slain with machine guns.

The Western media did what? In general, they took the Georgian side, supporting the killers, the terrorists. They supported these acts of slaughter, of cruelty. They criticized the Russians for defending their people. "Journalists" and "analysts" who receive thousands of Euros per month contented themselves to simply repeat stupidities and foolishness, without even trying to know what really happened.

The Russian Federation intends to do everything in its power to punish those responsible for this act of attempted genocide. The Commission undertook to make the case for a criminal investigation and this process must join the more than 2,500 cases delivered to The Hague (ICC) and Strasbourg (ECHR) by citizens of Ossetia against Georgian personnel. Five thousand one hundred and forty-three (5143) citizens of Ossetia were victimized during this attack, according to the Deputy Minister of Foreign Affairs, Grigori Karasin. Criminal acts of vandalism and looting were committed. Burial grounds were violated and acts of violence and cruelty were perpetrated against prisoners.

Let us tell the truth about what happened. On August 6th, there were incidents of violence, both sides blaming the other of having started the exchange of fire. On August 7th, a cease-fire was signed. Hours later, Georgian president Saakashvili (friend of NATO) instructed his forces to attack South Ossetia with a prolonged artillery bombardment, before tanks and troops entered the field. And why were there Americans mixed in with these forces? The images were captured on television. "Get back inside" is not an instruction in the Georgian language, is it?

On the 8th of August, the Georgian forces failed to capture Tskhinval, the capital city, and on the 9th of August, Russian forces destroyed the invading elements and liquidated the resistance, routing the troublemaking murderous Georgian troops and their military advisors. The military capacity of Georgia was reduced by destroying part of the military infrastructure of this friend of NATO.

Georgia had an obligation under Soviet law to hold referendums in South Ossetia and Abkhazia when it left the Union. It did not do it. Now, who in South Ossetia or Abkhazia would want to live again under the yoke of Tbilisi after the acts of slaughter in the former Republic and the planned act of murder in the latter?

The Russian Federation demonstrated more than a decade of extreme patience in looking for a political, peaceful and negotiated solution. Georgia has done everything to not carry out the referendums (because they knew that they would lose) and to block all the peace processes. Finally, a year ago, came the act of slaughter.

That NATO sees a friend in Georgia, says it all. Thank God that the families of the "journalists" and "analysts" who wrote the nonsense, lies and misinformation that was printed and shown on television did not suffer like the victims of their darling and illustrious Georgian war criminal, Saakashvili.

Photo: Ossetian civilians slaughtered by Georgian forces under the orders of Saakashvili, friend of NATO