Who is Rasmussen? The NATO I.E.D.

An analysis of what NATO is and where NATO is going as its new Secretary-General, the Dane Anders Fogh Rasmussen, takes office and vows to create a new strategic partnership with Russia. Nice words…but let us analyse who is Rasmussen and tell him some home truths before he launches his new panel, with Madeleine “I cavort with Albanian terrorists” Albright sitting on it. 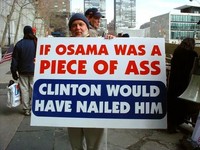 Who is Rasmussen? The NATO I.E.D.

For a start, a positive note in his opening speech as Secretary-General of NATO, the unelected arms lobby which dictates the foreign policies of its member states and serves as a platform to foster the interests of the weapons industry which governs the USA in a vice-like grip and feathers the nests of its minions in Europe, in recognising the need to create a strategic partnership with Russia. How sweet.

After all, NATO needs Russia far more than Russia needs NATO, because NATO is in trouble in Afghanistan. As regards Russia, any concentration of belligerent forces on her borders would be met with a salvo of missiles which would blast a crater 100 kilometres either side of it at any time of day or night.

On the subject of Afghanistan, this country had a socially progressive government back in the 1970s and 1980s, supported by the Soviet Union in the face of continuous destabilization by the US-backed Mujaheddin of Mullah Omar and Osama bin Laden. Children were at school, women had full rights, hospitals were built, social housing was provided, there was full employment. It was the dark force lunging behind NATO’s eyes (Washington) that launched the movement from Pakistan’s Madrassah which was to morph into the Taliban. So let us get that straight from the start. And now NATO comes cap in hand asking Russia for help as a resurgent Taliban controls large swathes of territory on a sustained basis. Who launched the Taliban in the first place?

Secondly where have we heard the name Anders Fogh Rasmussen before? Ah! I remember! He was the Danish Prime Minister during the Mohammed cartoons debacle, you know, the one who refused to apologise. Wow! That should make him popular in Afghanistan…in fact it would be difficult to imagine what could bolster the Taliban more, having a person like that in charge of the enemy forces….a bit like inviting Mikheil the Tie Eating Mass Murderer Saakashvili, Adolf Hitler or a suicide bomber to your (cardiac) great-grandmother’s tea party. Get ready for a surprise… Ka-boom! Happy birthday to you…

If Anders Rasmussen seriously thinks it is OK to print insulting images of Islam at the most delicate of times, pressing his finger into an open sore at a moment when debate and discussion and dialogue are the key words of the occasion, all in the name of free speech (you know, where NATO sympathisers take down websites, where US satellites block unsympathetic URLs, and so on, freedom of expression and all that) then it is clear that there are times when his judgement, wisdom and common sense fail him quite catastrophically. Watch this man. Cave canem!

Then of course there is the question of NATO expansion eastwards after Moscow was given guarantees that this would not happen. Then why did it? Where is NATO’s honour, where is NATO’s dignity, where is NATO’s word? In short, it doesn’t have a word, it is as trustworthy as Saakashvili, who one moment signs a peace treaty and the next sends his troops (backed by US “advisors” …sterling job, what?) to slaughter nearly two thousand Russian civilians.

And why is NATO speaking to a war criminal? Why does NATO consider Saakashvili as a friend? How can NATO seriously state that it is a supra-national political organization when it cavorts with cowards and mass murderers? Does Rasmussen know what Georgia did last summer? It sent its troops into South Ossetia on an orgy of murder, totally unprovoked - and planned the same for Abkhazia. And now he claims these two Republics should come back into Georgia? Is he mad, or what? How about asking the people of South Ossetia and Abkhazia if they would like to live under the yolk of that Hitler wannabe in Tblisi after what he did? And why didn’t Georgia hold the referendums in these two republics as it was obliged to under Soviet law?

So when Rasmussen is speaking about territorial integrity and so on, where is the mention of the background to the conflict? Consider South Ossetia and Abkhazia spoils of war which are now independent states whose populations do NOT wish to live with Tblisi. Period. Freedom of choice and all that…

And while Rasmussen is speaking about the territorial integrity of Russia’s neighbours, he should remember it was not Russia that started this conflict. Moscow bent over backwards to pursue a peaceful, diplomatic and political solution to the Caucasus question, it was his friend Georgia who launched a campaign of stalling and then violence. Mikheil Saakashvili, his friend, is a mass murdering war criminal who will eventually pay for his crimes.

And on the subject of territorial integrity, maybe Rasmussen should ask Madeleine Albright, who is rumoured to be one of his choices for his new panel for NATO’s new strategic concept, about what this means, specially after her role in Kosovo, where NATO launched a terrorist attack against a sovereign state on its own territory after favouring the UCK terrorists.

Maybe Rasmussen has forgotten who the UCK are. The Ushtria Clirimtare e Kosoves, or Kosovo Liberation Army, led by Hashim Thaci, carried out terrorist attacks against Serbian authorities. After decades of creating problems, after decades of Albanian women crossing the frontier to bear their children in Kosovo, the population balance swung away from Serbia in the heartland of its territory, where the Serbian Nation was formed (Kosovo Polye). When Serbia defended itself, NATO wined and dined the Albanian terrorists, siding with these drugs smuggling, arms trafficking pimps in their quest for a Mafia State.

Madeleine Albright knows all about it because she was the eminence grise behind the operation. Her smile as she shook the terrorist Thaci’s hand was sickening. And why did she do it? Because she “suddenly” discovered at the end of the 1990s that she was Jewish, as if she would not have been told way back when she was younger? Or because her boss Clinton had an awkward moment in the Oval office and needed a distraction while his wife was visiting war zones under fire?

So in short, what do we have? The guy who inflamed half of the world due to his arrogance and lack of respect regarding the Mohammed cartoons, making intrusive and insolent remarks concerning the territorial integrity of Russia’s neighbours, as if Russia ever started anything, failing to mention Georgia’s heinous role in the recent geopolitical framework, cavorting with mass murderers, then planning to appoint another apparent supporter of murder and terrorism, UCK-lover Albright, on his panel…while forgetting that NATO started the Afghanistan mess in the first place, overriding the wishes of the people of South Ossetia and Abkhazia…and finally mentioning nothing about NATO’s promise not to expand eastwards…not bad for a start.

Rasmussen is then NATO’s very own Improvised Explosive Device.